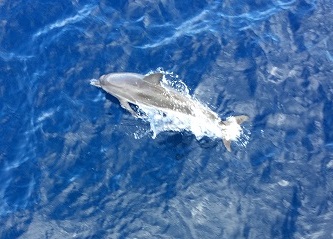 Today was the last day before our arrival at Santo Domingo. This has been the shortest leg, with only 5 days, though it has felt very long actually and I am really looking forward to reaching land. Even if we have watch the whole first day.

So, the day started as normal at 7 o’clock. I crawled out of my bunk and headed, half asleep, to the little mess for breakfast. I ate quickly and got ready for the morning watch. Today I was post, which I was pretty excited for actually. Though us being in the Caribbean, the weather today has been quite cool and it’s been raining back and forth. While I was steering the lookout came shouting ”leopard dolphin” and everyone walked swiftly (you’re not allowed to run on a boat!) to the forecastle. Sadly I couldn’t leave my post, but from half deck I still saw three dolphins jumping in sync next to the boat! They look so unreal, and leave you completely breathless every time. After a little while we posts changed positions, and everyone except us and the rondman went under deck for fika. We stood next to the rail, mesmerized by the dolphins swimming past. Out of nowhere one of them jumped, probably two meters above the water, and twisted mid-air, landing on its back! My jaw dropped and me and my friend, who was rondman, looked at each other in shock and zeal. Our dos had also seen the dolphin from big deck and shared our feelings of breathlessness. We all stood talking about what happened and stumbled on our words in shock until it was our turn to have fika. The day just kept getting better and better as the fika turned out to be Swedish cinnamon buns! They were delicious! Though I have to admit that they weren’t at level to my dads home made, which I miss very much!

The watch continued as normal and the dolphins sadly disappeared. One more highlight of the watch was that our Bås sat down on half deck and had a lesson about whales for us. It was really interesting and though I’ve never been especially interested in whales before, but it was so fascinating. I think you’re reading the words of a future whale enthusiast.

The watch came to an end and we went to the little mess to eat some well awaited lunch. After that we had some time to chill and recharge before lessons, so me and two of my friends went to her bunk to chill out. We sat there a bit, hanging out while listening to music, chatting, and writing some emails. After a little while our lessons started and we went to the big mess with the rest of our watch. In the middle of the lessons we got a little paus for the second fika of the day. If any parent is at home reading this I want to make it clear how much we definitely aren’t starving on Gunilla. That is the least of your worries. We have around six meals every day, six every day! Todays three o’clock fika was pancakes! My friend was in the galley today and had stood for two hours at the stove, making pancakes. They were, of course, very very good. Our stomachs full, once again, we went down to the big mess to continue our lessons until dinner. After dinner we usually have time to sleep a little bit before the evening watch. Not today though, as the commands on the boat had prepared a quiz later in the evening when we usually sleep. Before that, me and my friend once again sat down in her bunk, listening to music and chatting. After an hour or so we had to stop as the pub-quiz was starting. We came up on deck where one of our watch commander was standing as a bodyguard in front of the ladder. Luckily she let us through and we the went to our bosun who was bartender, standing behind a diy:ed bar surrounded by fairy lights. She was handing out ”beer” (pineapple juice with sparkling water”) and snacks to everyone. We sat down in groups and received quiz papers, all sailing themed. It was really fun, and though we hadn’t practiced at all it felt like it went really well. It’s weird how much we’ve learned in such a short time and without thinking about it. Though I can spoil the quiz and tell you that my group sadly didn’t win.

After the quiz we began our watch and I continued being post. All the sails were dowsed and the motor was on. It was so weird because there was no wind at all. Not much happened during the evening watch. We saw land the whole time which was very nice! While being lookout I also saw a butterfly flying around at the bow of the boat. The last fika of the day was the always appreciated pizzabuns. A big recommend! The four hours passed and the day ended. After a very fun day, with a weirdly large amount of surprising events, I went to bed and slept deeply until the next day began.