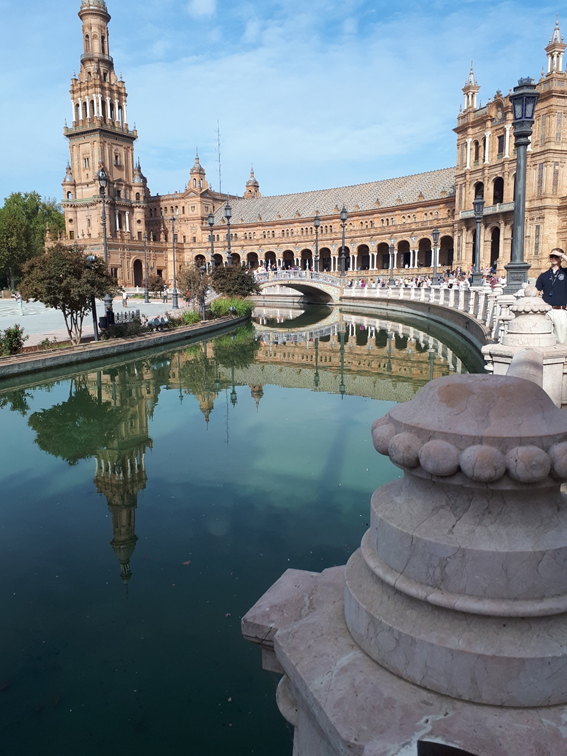 A day in Seville

A whole day in the city Seville with everyone on the sailing boat was the only big thing on the schedule for today.

We started the day like all other days with muster, strike eight bells and afterwards both the Swedish and the Spanish flags were raised. The rest off the day, we went on a trip in the city Seville where we had a tour with our guide Ana and a doll, named Lola, on a selfie stick. Lola was a kind doll and always showed us where the guide was so that we couldn’t loose her.

There were a lot of beautiful buildings, history and myths about them like bullfighting and princesses. For example a girl named Carmen and a boy that fell in love, but the boy had to quit his work he loved to be with her, and he did. After a while, Carmen met a new man and fell in love with him instead, and of course she broke up with the first boy who became really sad. Understandable. One day when Carmen was on a bullfighting where her lover played, her ex came and stabbed her to death. That story took place in Seville and became a famous opera seen by many people.

We walked trough small alleys and big roads. On many places beside the roads there were orange-trees and the guide told us they were really sour and had like a bitter flavor. A few from the class decided to taste the fruits anyway, but there were a few faces that didn’t like the Oranges and they realized the guide had told the truth.

For lunch, we had lunchboxes made by the chefs at Gunilla, but there were people who preferred to buy lunch instead. After lunch we had some “spare time” from the guide tour. We took the opportunity and looked in different shops at the streets. Both stores made of companies, like Zara, and private stores selling things like jewelry.

In the evening, it was the amidship’s time for watch and the majority of the rest of us walked to the city and the beaches. We did some assignment where we had to interview some people in English and in Spanish. It was really scary, but we all did it without any problem at all. It was almost fun to interview in English, because there’re not many Spanish people who can talk English so well. It felt like you were so much better than them, even if they were adults.

After that, it was time for dinner and go to the cozy beds and sleep.