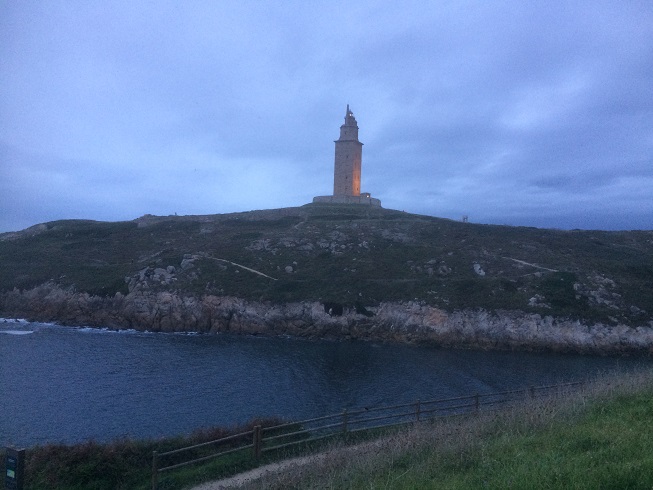 A first day in Spain

I woke up by the disturbing noise of excited people laughing and running around in the hallway. I wasn’t supposed to get up yet but even though I was exhausted from only getting about 5 hours of sleep the noise from outside kept me awake. So, I was the first one in my cabin to get out of bed.

I went up on deck to check out the weather. Apparently, we had just arrived to A Coruña, Spain. It wasn’t as warm and sunny as I had imagined Spain to be. The sky was cloudy and a slight breeze brushed up on my arm. I had breakfast and dressed for a day in the town.

We stayed for lunch at the boat before leaving but soon after that, me and a couple of my classmates were walking through the city. We were going towards the famous lighthouse the “Tower of Hercules”. It’s the oldest one that still is being used to this day, built by the romans in the 2nd century. The view from up there was great.

During the rest of the day we were just walking around in the city, exploring, drinking coffee and shopping. The time went by fast and soon it was time to sit down at a restaurant and have dinner. We choose a Thai restaurant were most of us ordered Pad Thai. I usually don’t order that but that was the best Pad Thai I have ever had.

It was now getting late and since we need to be home at 10 o’clock, we had to hurry up but luckily, we came home just in time.