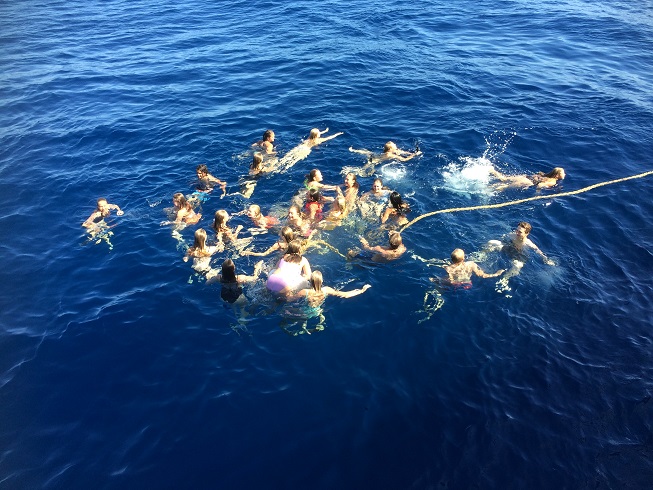 We`ve got an estimated 16 days left on the Atlantic before we reach Grenada and things are already getting crazy. For starters we seem to be lacking the most essential element needed for sailing, wind.

However as it so happens this is not only negative since it gave us the chance to have a swimstop today! A stop that sadly enden in 3 students getting jellyfish burns...Which could be really dangerous out here on the Atlantic since some of the jellyfish species found in these waters are apparently downright deadly. Luckily the jellyfish that we encountered today didn't do more damage than inflict some pain upon those affected, so all in all everyone is still fine (:

Another rather dramatic happening today occured during my mornig watch. One student was, in order to easier complete a task, standing on a wooden bar that runs right along side the boats railing. Suddenly the rope that she was pulling snapped out of it's holder, resulting in the just before taught rope to go completely slack, which naturally caused said student to loose her balance and fall backwards. And falling backwards right next to the railing isn`t exactly thesafest thing one could do… Luckily she fell 10 cm to the left of the railing and just managed to avoide getting wet. Now even if it doesn`t sound too bad to fall overboard out on the atlantic on a warm, sunny day, rescuing someone using such a big boat as Gunilla isn`t the easiest task. So I believe it's safe to say that we were all rather relieved that mentioned student fell those 10 cm to the left and not into the water.

Apart from the above described incidents the day has been rather calm and it feels like as though everyone is falling nicely into the rythm of life onboard of Gunilla again after the week on Cape Verde. I don't even think anyone has puked due to sea sickness yet! So in conclusion I`m looking forward to a nice crossing over the Atlantic with perhaps a few less “near almost death” experiences per day. And even if 16 days might sound like a lot it feels like where almost there already, I mean the weather so far has at least matched my view of the Caribbean.