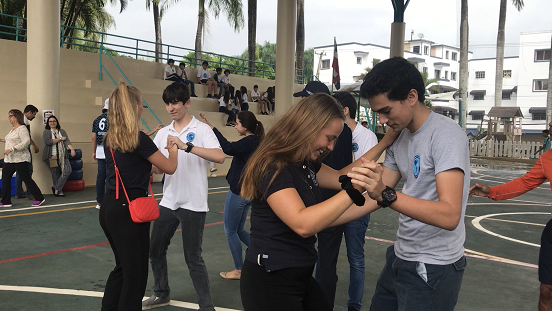 This eventful day started out with a school visit at the Community for learning, where we got warmly welcomed. We walked out of there, with not just more knowledge about the history and the society – but also in Merengue dancing.

This was followed by a visit to the well known caves “Tres Ojos”, on my and a couple of others own initiative. As for the end of the day, my English group and me gathered to do some recordings, but ended up in an emotional discussion. Since we’ve had some pretty calm and sensing school visits before, I didn’t have any expectations of doing something else than asking questions to our school projects and perhaps get a bite of food. But it turned out to be a lot more since we spent over an hour in their PE–hall dancing. Merengue was the main focus, but other dance styles were shown and done as well.

In the middle of everything the rain started to pour down, we were then very happy that the PE–hall had a roof even thought it was outside. It actually got pretty cozy and for a moment it felt like being home in Sweden.

The school visit however was a success and I think we all got out of there with a good feeling in our stomachs.

The day continued with lunch back at Gunilla, a few omelets later it was off again to the caves that the elder students had recommended. The ride wasn’t so long but we struggled with finding a taxi, but at last we found one although we had to fit in seven people in a five–seated car.

The caves were very impressive and beautiful. We happened to overhear a guide telling someone else about movies that had been recorded there. As far as we understood, “Jurassic Park” was one of them.

In addition to the caves, there were pools filled with some turtles and many fishes. In one of the pools we put down our feet and let the tiny fishes eat our dead skin from them. It tickled a lot but we got some cool pictures so it was worth it.

When we had been walking around there for a while and seen everything we wanted to, it was time for dinner and since we hadn’t written ourselves off from the dinner list back at Gunilla, that was our destination. We asked for a taxi and what they offered was a five–seated car once again, it was just to accept it and to get as small as possible.

The last thing on the day’s agenda was to film our English movie, which we began to do, until a minor argument developed. You can tell that everybody on the boat is getting a bit tired of each other, homesick and also very sensitive. But our group solved the problems and finished almost every scene in our movie.

So after a turbulent day with many different things, I went to bed with a whole bunch of new experiences.