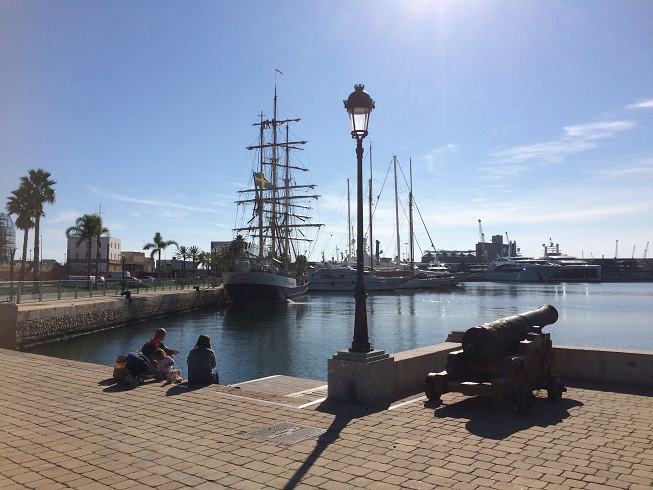 Yesterday we woke up in the harbour of Tarragona. Not the most beautiful sight compared to Lisbon (my favourite city in Europe so far), where all the houses and alleys looked so picturesque even from the boat. On the other side we are laying right across one of the biggest and most expensive yachts in the world, owned by the Emir of Qatar. So, I guess you could call that a view as well.

Our first day ashore was really calm and stress free. Because we only got four hours of sleep last night we fell asleep in a park after enjoying a big but cheap picknick. The rest of the day we wondered through the surprisingly beautiful city of Tarragona.

But now I would rather tell you about our unforgettable night watch. The first hour or so we did some cleaning on deck and in the crews´ cabin. At 01.30 we were up for oat cookies and smoothie on deck. Meanwhile our watch leader told us all about her voyage across the north Atlantic in the viking ship called Draken. Then we got the opportunity to do what ever we wanted with the next two hours and we came up with the perfect idea. We were going to prank the next watch, starboard, that it was raining cats and dogs outside by making it pour from the galley house roof. Our plan was the following: first of all, we prepared the one who was going to wake the next watch with a soaking wet raincoat and boots so that it would seem more believable. Meanwhile a friend and I dragged up two water hoses to the galley house roof and tried out the right technique. Just above the door we placed a speaker playing thunder sounds and we also staged that we were in the middle of salvaging the sails.

It all went according to plan. They believed it so hard they waited until the last minute to step out to avoid the “storm”. By then my friend and I made sure it really was raining cats and dogs from the roof. It was a funny sight to see them one by one run through the stream of water with rainproof clothing from top till toe, only to realise it was a prank. We all burst out laughing except starboard who just had had their morning shower. But later on that day they all admitted it was a great prank. We couldn’t be more pleased with ourselves. This was a night to remember.