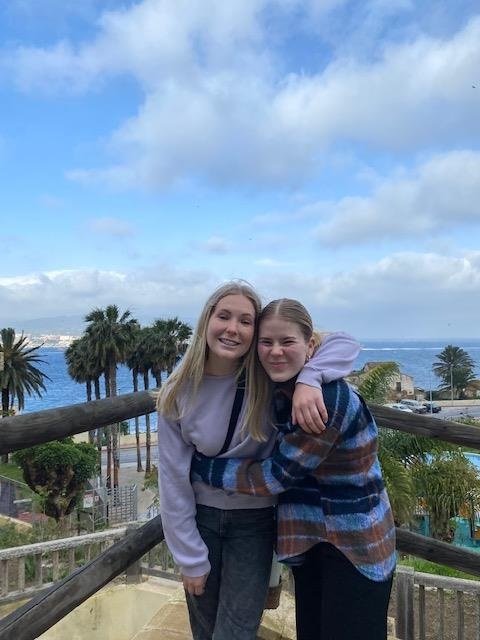 An eventful day in Ceuta

Ceuta is a peculiar place on earth. A remnant of the Spanish Empire, a piece of Europe in Africa and a place where different people come for very different reasons. This was our second day in Ceuta.

Our DOS (teacher onboard) gave us a “city walk” before the arrival to Ceuta: a list of things to do and places to visit when we got here. First, we went to the Military Museum of the legion. It was a museum dedicated to the Spanish legion of the early 1900s, especially to general Franco Francesco and his troops in memory of the war. The next task was to take a walk to Tarajal beach, the border of Ceuta to Morocco. We were met by several layers of thick walls and barbed wire, guarded by military. The third task was to climb “Monte Hacho”. The road up to the top was very beautiful. We went through a park, further into a forest and then we reached a fence. It was a military facility, so we enjoyed the view over Ceuta for a while and then turned around and went downhill again to reward ourselves with some croissants on a cosy café.

We walked around town and found a place called Plaza de Africa: a small square with a monument of a war that was fought between Morocco and Spain for Ceuta’s borders in the 1860s. There we met a couple of guys we saw the day before. We ended up on the same bench as them and tried to talk with them. It was just the small detail that they only spoke Arabic and some Spanish, meanwhile we only knew Swedish and English. We tried to talk to them with our scarce school-learned Spanish, which wasn´t much to make a conversation of. Luckily, we ´re living in 2022 and have phones, so we used google translate to communicate. They were from Morocco, had left their families and swum across the border to Ceuta about a year ago with purpose to “search for a future”. They were young, around 10 to 16 years old I think, and they told us they were too young to be able to work here. So, there they sat on a bench on the small square called Plaza de Africa in the sun, longing for a future. We thanked them for being willing to talk to us, wished them luck and then went on with our day with nothing to worry about but possibly the blog I´m currently trying to write.

We went back to the Gunilla, had some delicious dinner made by our very own (really good) chefs. Then, when the sun began to set, we went to the beach La Ribiera and took a swim in the sea. The temperature in the water was about 16 degrees and it was very windy so we didn´t stay for long. But as we always say: you never regret a swim!

Afterwards we went to the basketball court and played for a while. When it got dark, we took a turn past the best ice cream store in town and walked home snacking on our ice cream cones.

Around 10:30 PM I remembered I have a PE-assignment to improve my condition. To measure the development, I had decided to run one mile in Ceuta, run regularly during our trip and then one more mile in our last harbour to see how much faster I can run now compared to later. So, it was just to lace up the shoes and start the challenge. I usually hate to run because it´s exhausting and extremely boring but this time it felt not so bad. Even though I only ran back and forth on the quay. I did finish in just below an hour, which I didn´t knew I could do, so that also felt good.

Ceuta was a very good harbour to gather information for the assignments of the trip. This day was interesting, educational and rewarding.