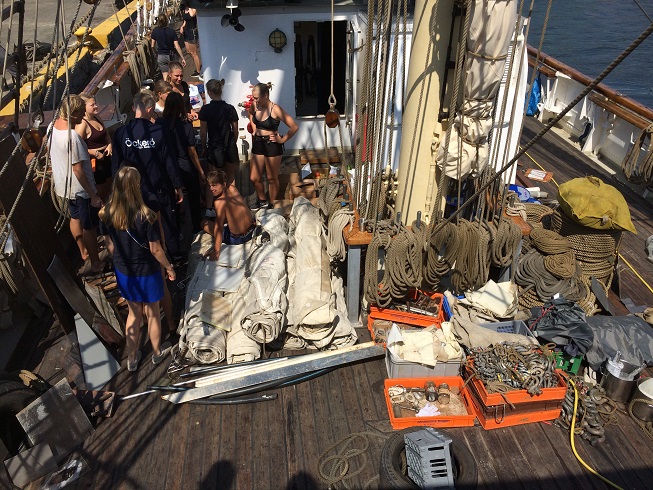 Another day in harbour

I´m writing this blog a few days late. To be honest, I don't remember all that much of January 27. We were still in harbour and it was our watch day. We got a food delivery, I think, which we had to pack into the big and little mess. The sun was burning and I was lucky enough to get a task under deck.

We're so close to the trip's finish now that we've started on The Final Cleaning. Part of this was me and Rebeccas assignment, lifting everything out of the floor in the students corridor, clean it out and checking the inventory. This would have been pretty easy had it not been for two leaks that we soon found. Our watch leader told us that a huge can of some kind of chemical had spilt under one hatch.This wouldn't have been that hard to clean up if it wasn't for a water leak, which at the time we found it was about two decimeters high, under the hatch right next to the chemical spill.

For dangerous tasks like this you have to suit up. Huge red gloves that look like lobster claws, plastic ski glasses and a lot of rags. We went in. It took us about six hours to clean everything up, which was pretty much the rest of the watch. I like these monotonous tasks, they make time pass quickly. You get very used to routines when you've lived on this boat for a while. You get better at them as well, you know how long you can lay in bed half asleep and still have time for breakfast. Or on the cleaning watch, you get into the routine of cleaning one part of the boat and do it really quickly eventually.

The Final Cleaning is a pretty weird thing though. It really doesn't feel like the trip is almost over. You talk about it all the time but really it feels like this would never end, these routines would never break. This is the last leg but it doesn't feel any different than the previous ones. Soon though, the boat will be cleared. The same day that we leave this boat and this huge event that we've all been through together will be experienced by another class.

Even though it might not fit in I want to tell you about my night watch as well. In harbour we all have two hours during the night where we sit up and guard the boat. This time my watch was pretty early, but it was completely dark out. The stars were bright, although you couldn't see them as clearly as out at sea. Me and Dotti and Elin were sat talking and playing a game. We welcomed some new crew members onto the boat. Our new captain had arrived the previous day. Him and another crew member, Karin, were sat behind the navigation hut. They started playing music, our captain played the violin and sang and Karin played the banjo, they were both really good. It was just really nice sitting there in the dark, the boat rocking slightly and lovely music being played behind us. It's a memory I'll always keep.

Thank you for reading my blog. /Maya