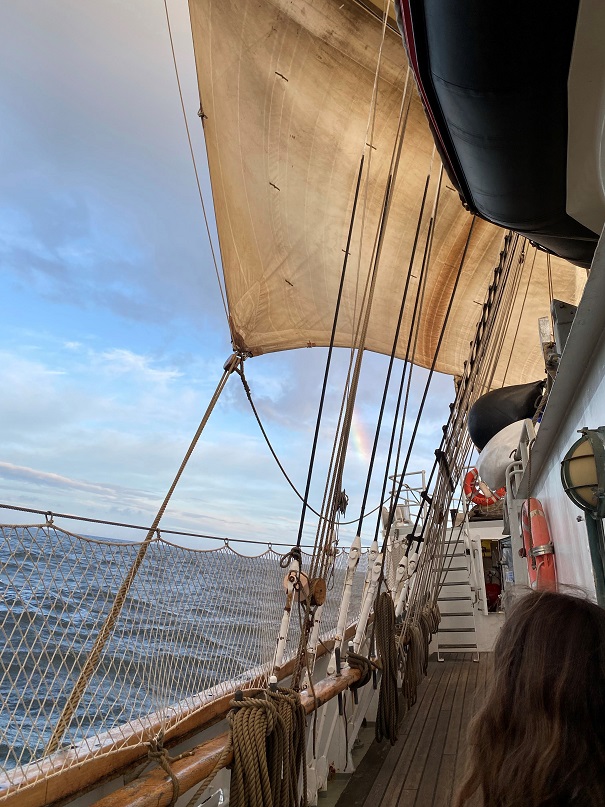 I am in the 12 to 4 watch so the day started with watch. We just left Plymouth and were on our way to Saint-Malo. Because we sailed a new distance we switched watch times and with that our watch leaders. We were not on top, everything we did was out of rhythm. For example when we hauled rope to set the sail we could not stay in the same rhythm and everyone forgot to repeat and call out directions.

Although the night was a mess the sky was not. The skies were clear and because the moon was not out, you could see the stars clear as day. If this was between England and France imagine what it would’ve look like in the middle of the Atlantic. I got to go up in the mast and to secure the sails and the view was insane. Even though it was an amazing night I could not wait to go to bed and sleep till lunch. But that was not the case, my cabin was woken at 8 am by the other watches shouting in the corridor when they got off their watch.

When I woke the second time it was brunch. The weather was great, the sea was glistening in the sun and you could see land! We were in France and cruising towards the port. While we were waiting for the pilot to lead us into the harbour it was our job to go up in the mast and secure the sails. Since there were so many sails that needed securing we got help from the starboard and midships watches. Since it was beautiful weather and there was no trouble fastening the sails but the footing and wires were covered in tar. I got it all over me, to say the least my white t-shirt is no longer white. I was up in the sails when we drove into the harbour. We moored at a quay that was very popular, people stopped and looked at us and I even got to practice my French. Although it was not very good and all I could say was Sweden. My watch, Port watch, got watch today so we couldn’t go out and explore the city. Instead we got to work. It was odd working here because there were tons of people standing by outside looking at the boat while you were scrubbing the railing or taking out the trash. The work was hard but it wasn’t boring, it was a great but tiring day. Now I’m saying goodnight with my t-shirt sunburn and hoping for a great day tomorrow exploring the city.