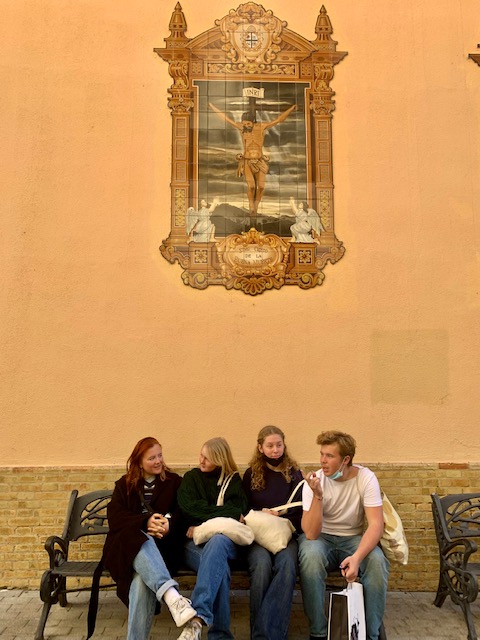 A sunny day in Spain

After the morning assembly, most of us were really tired. Portside had taken the watch during the night and therefore everyone had missed a few hours of sleep.

Usually that means that a lot of people head back to bed again, but today was the only whole day we had in Huelva before leaving again. Also it seemed that the weather would be nice, so instead of sleeping we got ready and went downtown.

A few hundred meters from Gunilla there was another ship, which turned out to be a replica of the ship Christopher Columbus had sailed. Of course we were curious so we got there and found a guy who worked at the ship. It turned out that they were leaving for Dubai this Friday, which is really cool. It seemed that he was kind of clueless when it came to sailing though.

Since all of us had missed breakfast, our next stop was to get a coﬀee and something to eat. After walking around for a little while we found a few classmates on a café. Apparently the coﬀee there wasn’t very good, so we continued looking. We found a really cozy place just a bit further up the street.

Suddenly a few hours had gone by and we started to get hungry again. Time for lunch, we said. The next stop was a small restaurant a few hundred meters away. They had the best Coca-Cola I’ve ever had. The restaurant was located just by a crowded street which was fun because we looked at the people passing by. We came to the conclusion that there is a big diﬀerence between Spanish and Swedish fashion.

By the time we were finished, the sun made an appearance. Some of our classmates were at the beach so we took a taxi to join them. After hanging out at the beach for a while, the sun went down and it was time to get some dinner. We ended up in at a place called ”Surf Bar” and had some burgers. During the dinner there was a live band playing. Then it turned out to be some kind of birthday party, which was kind of awkward. The food was good though!

When we got back to Gunilla it seemed that everyone had had a nice day. I really think that the weather made the whole day better. In the previous ports it has been colder outside, which has limited things to do and also has aﬀected people’s moods a little bit (especially when it has been raining). We are all looking forward to spending our last week in Malaga!