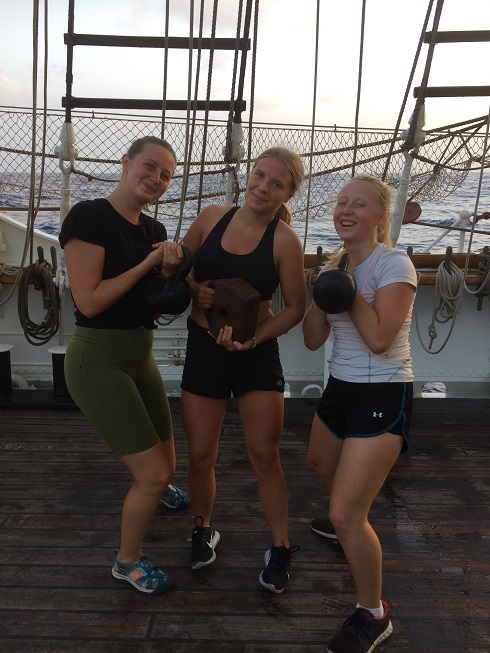 It`s been an ordinary day here at Gunilla, nothing new or exciting has happened. We woke up at 7 in the morning in order to eat breakfast at 7.15. Between 8-12 we had watch. It was pretty fun and we talked a lot about whales, which is because we have an ongoing whale bingo. We are not doing very well at it but we do our best.

For the first time since this trip started me and my friends trained. I didn’t plan on doing it but when everyone else in my watch did it, I felt like I should too. We went outside and set up different exercises in a circle on main deck. Then we circulated between the different stations and we did each station for one minute. We trained abs, legs and arms. The workout lasted for an hour and it was very fun. I noticed when we were done how much I missed working out and also how hard it is doing pushups on a boat.

To get more daylight we do something called to brassa klockan which translates to setting time back an hour. We did this at 8.00 o´clock in the evening (when we were supposed to go on watch) resulting in the clock once again only being 7.00 instead. We were thrilled about getting one more hour of free time which most of us used to get an extra hour of sleep. It was a well needed hour of sleep, at least for me.

The most important thing that has happened is that we finally have some wind. During this crossing over the Atlantic we`ve had such a lack of wind that we´ve been forced to put the engines on. Which was a bummer because we´re here to sail and it was also a little worrisome because we don’t have enough fuel for the whole Atlantic. Lucky us the wind picked up and we could turn the engines off. It was a really good wind and now we are going in a steady 8 knot. If the wind is persistent, they say that we could be in Grenada at the 11th of January. We have mixed feelings about this because everyone is pretty tired of the sea but if we get there early our school assignments must be in earlier which not everyone is happy about.

When we got up on deck for our night watch our officer told us to look for something. He didn’t tell us what to look for, the only lead we got was bird, fish and in-between. It took us a few minutes before we figured it out, there was a fly-fish in the pool. It had jumped on deck from the sea and then someone had found it and tossed the fish in the pool. A bit later in that watch two of our watch leaders took a bath with it before they threw it back into the sea. The fly fishes are an ongoing problem for us. They always insist on jumping up on deck and getting stuck somewhere, which is annoying and sad since most of them die.

That’s all for this day and all in all everything is going well on the boat even though it would be nice to see something else than just water when you go outside.