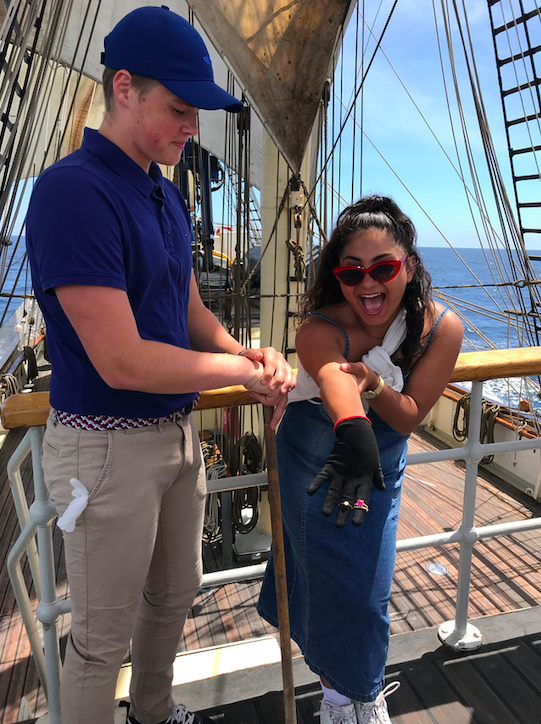 It wasn't over yet, they still had a shot at winning. The salt in the air was intwined with the tension from the most intense Atlantic Gold Tournament match I've ever attended.

Today we hosted our Atlantic golf tournament finale which consisted of one winner from each watch and one from the crew. The golf ball consisted of a "snusdosa" and our golfputs were oddly similar to the brooms that we clean the main deck with. It was a day mixed with lower class equpiment but with an upper class dresscode, and for once it felt very good to be dressed up whilst on watch instead of wearing my sailing pants and having tar smeared all over my face, hands and whatever body part that's been leaning on something it shouldn't had.

The captain was the representative from the crew and he had a good start making the other contestants very nervous. Linnea from port was very unimpressed though towards his strong game but I think that the nerves got the best of the students which lead to Torben still being in the lead after hole two.

It wasn't over yet, Linnea still had a shot at winning. The salt in the air was intwined with the tension from the most intense Atlantic Golf Tournament I've ever attended. Unfortunately, the obstacle that our watch had previously put up was too difficult to get around which lead to more strikes and a second place spot for Linnea.

Erik, the representativ of midship, was now competing for third place and proved his game as he swung the shot of the century. The golf ball flew over the two obstacles, everyone was gasping and applauding. In that moment everyone were oblivious to the fact that they still didn’t stand a chance against our beloved captain, Torben and his devoted caddy, Elvira.

As said, Torben swept the rug with the other contestants as a captain should, because what is a captain if not wiser, stronger and better at golf than his crew. Erik represented our lovely watch, midship, but unfortunately he came in third place so there's been some discussion in midship about disowning him and throwing him off The Royal, but nothing has yet to be confirmed. Stay tuned!