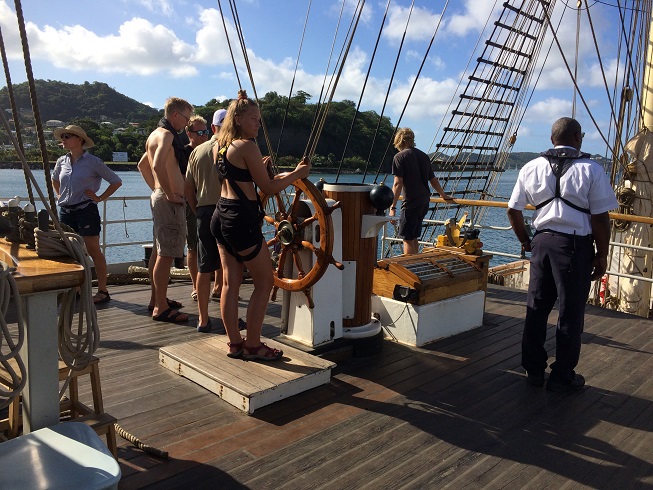 My tired eyes opened as I forced myself to leave the bed and walked with sloppy steps to breakfast. As usual I ate porrige topped with raisins, cinnamon and sugar. After breakfast, still in pyjamas, I walked up on deck for the morning lineup and when they after what felt like ages let us go, my bed where waiting for me.

The four following hours I slept and it was the best decision I ever made. After not sleeping much at all in Grenada or over the Atlantic it was very nice to finally take time to sleep. During the time I slept the wind was nearly non existent, therefore the boat could be stopped and the ones who were awake swam from the boat and had a lot of fun. When I found out about that I was pretty bummed out I missed it, but still the sleep was worth it.

When I woke up I changed from the confutable oversized t-shirt to shorts and a tank top and went up on deck for watch. Todays watch I was lifebouyguard, lookout and helmsman, in other words post. Being post is usually very boring, just standing there alone, wandering off in deep thoughts and thinking about how you ended up on a sailing ship in the Caribbean. But today I actually had a nice time. When I stod there on the front of the boat as lookout I talked to my self like a mad man and sang some songs which I didn’t even know the lyrics of, it was pretty fun.

After the watch everyone either went to their cabin or the big mess. Because it was Sunday and first day at sea we didn’t have any lessons, instead me and my friend watched a movie called ”us”. We sat down in a corner of the big room with some blankets and the light turned off. The movie is a thriller and I had seen a movie made by the same director before and therefore I was very hyped about it. The movie turned out to be a total let down because of how weird and confusing it was. When you’re at sea watching such a mentally trying movie there’s not many other things to think about. Sleeping was pretty hard when the only thing you could think about was that screwed up movie.