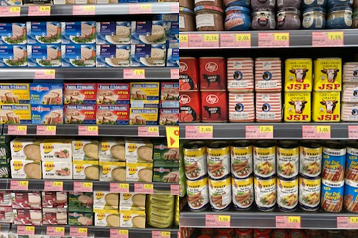 Canned rice and bottle openers with a sixpack

The morning begun with three silent knocks on the door. “Is everyone awake?” The roundman said as she pulled my curtains aside. The sharp light from the lamp made me want to go back in my dark cave even more, but breakfast was in ten minutes and I had to get dressed. I crawled out of my bunk and put on my sporty shorts and a cozy knitted shirt i thrifted in La Palma. I haven't washed it yet and the well known smell of thrift stores (they all smell the same for some reason) seemed kind of nasty to me in such early hours.

As I washed my face and patted it dry it came to my mind that it was in fact sunday which meant bacon and eggs for breakfast. I am vegetarian so I had a fried egg and some porridge before I went back to the cabin to brush my teeth. As I walked up for morning gathering on main deck someone further away in the corridor yelled that it was lifejacket and harness check today. They all have a number that connects the gear to the owner, for example my harness has the number 1613. Some people had forgotten or lost their gear and as they were all marked off in a list two commands went under deck and then we all knew what was going on; cabin check.

The cabins are supposed to be clean from stuff on the floor and the bunks are supposed to be made so that in case of fire, you can clearly see whether someone is sleeping in there or not. To our big fear my cabin realised that we had been lazy with cleaning lately and that two loads of laundry on the floor and only one bunk made, it would not pass the check. As we were all told to clean better in a rather angry way we faced our next big fear: the shame bucket. It’s a big bucket placed in our social area Stora Mässen were you put stuff it’s owner did not bring back to the cabin. When the overflowing can was emptied on deck i saw my cardigan fall out and it felt very embarrassing. Ashamed I picked it up and went down to Mässen for lesson in physics.

With slow internet connection and struggling to transfer some data I gave up on physics and decided to go on deck to write a bit on my biology report. As the sun shone down on me and with some cheesy 80’s love songs playing in the background I found the hours with the report very pleasant. After lunch me and my friend went to the little city to buy some snacks and fruits. The grocery store was rather tiny but we ended up finding what we were looking for, as well as lots of strange canned foods. That was one of the first things we noticed in the grocery store in Tarragona and the same things can be found in every supermarket in Spain it seems. Several types of fish, clams, skinless sausages, cheese rolled in ham and squid and black rice all put in little rectangular cans.

I find it very strange that people apparently consume that as I find those things disgusting. We went into a souvenir shop as well and found a couple of stange bottle openers in shapes of over sexualised women's bodies and penises. We bought none. Before dinner we played a very exciting game of a music quiz with 70’s and 80’s music, which i did not win but ended up catching the second place in. After dinner we went to buy chocolate pudding and watched a movie before it was time to leave shore for an exciting last four to eight hours at sea. There was no wind so we ended up going by engine the entire watch which gave us time to look at the stars and listen to the waves.