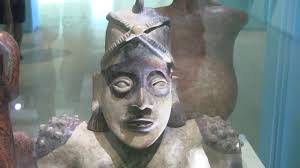 “This here is Jacobs blog. Because he is too lazy today, and I am in good mood, I will try to do it for him. Jacob went ashore today. I bet he had loads of fun. I bet he saw loads of cool shit in some Mexican village, and probably tried to stick his chewing gum on some ancient Maya offering-knife. I bet he didn’t behave well at all on this field trip. But we will make him pay…. Oh yes sireee bob. Jacob; your days of leisurely sailing are numbered. Now begins Hell.” Hans.

This is what happens when you let your captain take the command of your blog, and he is partially right. We saw some “cool shit”. But it was not at a village and chewing gum wasn´t allowed so I had to spit it out even before the tour started…

Anyway I think our guide appreciated us almost as much we appreciated him and his knowledge. But most importantly his ambition to teach and make people aware of the Maya culture. Maya people have had a hard time being discriminated, and have found themselves at the bottom of the social hierarchy. Richard Long, a man who have been living in Progresso, Mexico for decades has helped Maya villages getting a voice and helped them selling their craftmanship. The results of his dedication has increased the knowledge about the Maya people and made the society aware of their situation, which has created economic opportunities and a better living.

When the tour around the Maya-museum was finished, we were able to chew our gums and allowed to drink water in a fiery hot Mexico. Instead of going to the beach (as normal folks do) when the temperature is above 30 degrees (Celsius ) and it is almost as hot in the ocean, we went off to the center of Merida. Merida gave us a proper welcome in the shape of astonishing taco-ships and amazing guacamole, not weird that Merida is some of the crew-members favorite port. The city were beautiful and filled with a lot of people, both tourists and people living in the city, which made it feel “alive”, that being one of the big differences from Belize.

However, I hope that Hans will spare me so I can continue my “leisurely sailing”;))