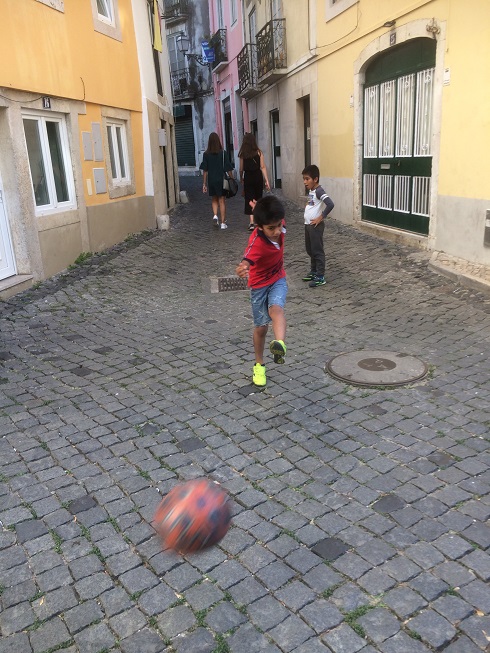 My day started with a little bit of a stressed situation. I had overslept and all my classmates were waiting for me on deck. In mear 60 seconds I managed to get up from my bed, put on clothes, and get all the way up on deck.

The damage was undone, or so I thought. The moment I stepped out on the deck I realized that I was the one who was supposed to ring the bell at 8 o clock, but the problem was that someone was already standing by the bell on the poop deck(at the aft of the boat). In my hazy morning dizziness, I threw myself toward the only remaining clock on board, the one in the stern. Only to stop hastily as the whole crew was screaming behind me. Soon I realized that, while in harbor, you only ring one bell at 8 am and its the one that was already manned. Slightly embarrassed and still incredibly tired I walked back to the rest of the class as everyone giggled around me. Well, I think that is enough embarrassment for one day. Now back to what happened in my life on the 9th of October 2020.

The day before we had been stuck on the boat doing maintenance work while the two other watches went into the city. It had been a very hard day of work since I had been looking forward to walking the streets of Lissabon for the past month. Perhaps the only good thing about the day before was that I then got the chance to plan my stay in the city,which looking back, was a good thing,

Lissabon is a huge town with over 11 million inhabitants and it stretches far and wide. So it's a good idea to know where you are going when you start marching down the street. And I had a plan! I had heard from my relatives, as well as friends, that the Alfama block in Lissabon is very beautiful. And that I can now attest to as well. Never in my life have I ever seen such an elaborate maze of streets and stairways as I have in Alfama. Alfama is the old part of town that survived the earthquake in 1755. Therefore all the buildings there immediately stand out from the rest of the city. And that goes for the streets as well. Everything is worn down and the roads are so narrow that cars can barely get through. And as if this wasn’t enough there are people everywhere, doing everything from walking to their jobs, drinking a cup of coffee only centimeters from the street, where cars are rushing by, to painting elaborate portraits of confused Swedish tourists thinking they got a great deal for their portrait paintings. In short, it was chaos, but not in a bad way. In fact, quite the opposite. Everyone who I saw in Lissabon seemed to be comfortable with the chaos around them. And I think that is what makes Lissabon so special. That even though you can’t get through the city without nearly getting run over at least three times and having to use all your brainpower to the absolute max to find your way around, it still brings this calm over you. It makes you feel like your only I tiny little peace in a giant ecosystem and lets you focus on your own life without getting riled up by reckless drivers or grumpy salesmen. Even though I’ve only spent one day in Lissabon, so far, I feel like it has been a year. And I still feel like I’ve only reached the tip of the iceberg that is the city of Lissabon.