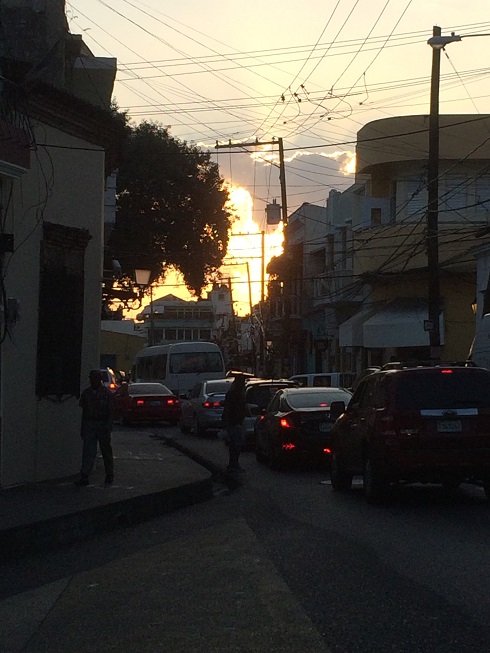 Dancing on the streets of Domingo

Life is wonderful here in the Dominican Republic, at least for us tourist only visiting the safe parts of town. The city of Santo Domingo is so full of life, music and stores that sells everything from watches to hats and toys.

Anyway, for me and the rest of the starboard watch it was our second day on land so today we were a bit more comfortable with the city and the life here. The day started with a bowl of yoghurt and one boiled egg with caviar for me. After the morning line up me and about five others went into town and quite quickly we found a café in the heart of “zona colonial”. I drank a morning coffee and a cold lemonade, the two specialities of the Dominican Republic. We continued our day deeper in to town with some small shops selling more thing than you can imagine, an antique store we first visited yesterday and a good lunch.

After another couple of hours in town we went back to Gunilla to just take some time to relax. After the delicious taco dinner we decided to hurry back in to town to get as much time there as possible. It was now, after the sun had set, that the life of the city really showed. People dancing marengue, samba and tango this Saturday night in the city with two million inhabitants was a feeling that I late will forget.

After a visit to a second hand store were i bought two shirts we went to an outside bar/café were we threw dart, played some games and over all had a good time. On the way back to Gunilla we were dancing on the streets of Domingo as soon as the moment to do it showed up. This city feels so alive in a way cities like Gothenburg only can do the nicest of spring days or during one of those beautiful summer evenings.