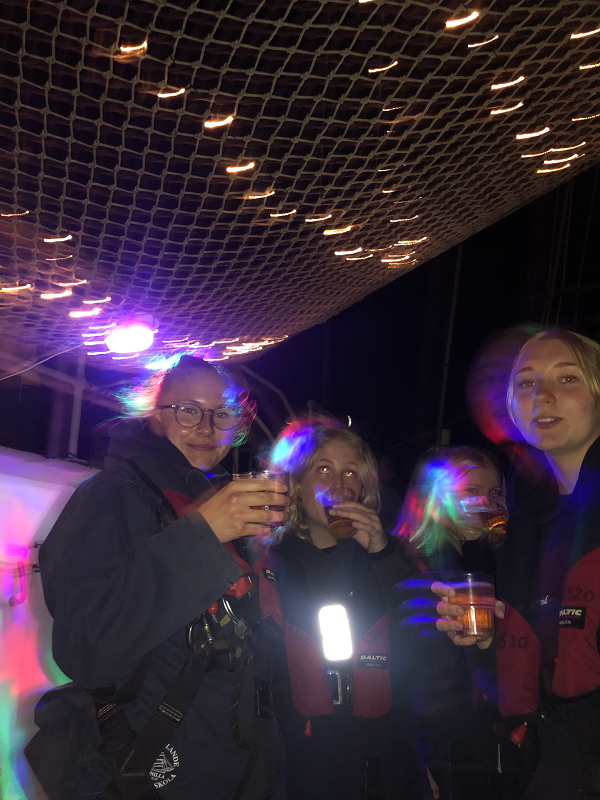 I can only imagine how you’re feeling reading this the first day of the new year, after a rough night leading you to 2022! You might also think that I’ll be able to relate to your problems, since I always get seasick and I happen to be located on a boat which never seems to stop moving. But this time, I’m the one laughing. I’ve even been Backis and not felt ill a single second, even though the kitchen on T/S Gunilla could be compared to being trapped inside a laundry machine. I couldn’t be happier!

New Year’s Eve on T/S Gunilla is almost like laying by the pool to an all-inclusive hotel after you’ve taken a bath. You just got yourself a cold coke, and you’re almost like a soap in a bathtub when you lay in the sun as you open the can. Except that there is no all-inclusive hotel here where you can get coke whenever you’d like. Actually, we don’t even have a refrigerator in our part of the ship. Instead, we have to drink room temperature coke. The comparison between T/S Gunilla and an all-inclusive hotel was actually pretty stupid for many reasons, but especially because you can’t swim unless the captain has stopped the boat and said that it’s a bathing stop! We had a man-over-board-exercise today which reminded us that the bathing-stops are stops for a purpose. It would be very inconvenient if we just jumped overboard when we felt like swimming, since we probably would die. We threw a kale in the ocean and pretended it was a poor human. I actually felt bad for the kale, since people where very unfocused and lost track of it quick. The kale disappeared quick, and it had clearly passed 500 meters before we caught it… The purpose behind the exercise was to spread a message: don’t take a swim unless captain tells you so.

All jokes ahead. T/S Gunilla is almost like a vacation at an all-inclusive hotel when it comes to the stress-levels that you have. We just eat chips all day and enjoy the sun that kisses our cheeks warm. Everything at Gunilla is at its normal chaotic peace. Even the waves happen to be the kind of waves that you actually enjoy. They put a smile on your face when you watch people head to the toilets through the corridor. Everyone’s tilted and sometimes a bigger wave surprises you, which results in them helplessly falling against the walls in the slippery slippers.

The celebration of the new year was without fireworks and alcohol. I bet you can’t relate, haha! Instead, we had a bar on main deck with alcohol free apple cider and many different kinds of soda. My watch had decorated very beautifully on main deck while Ludvig and I were backis and got to clean the kitchen, do the dishes, bake scones and make warm blueberry soup. The bar opened at 23:00 when I had one hour left of my watch. I drank a few glasses of Madeira’s special passionfruit-fanta while waiting for the other sleeping watches to join us on deck.

At midnight, the youngest person on the boat got to ring the bell eight times as a goodbye to 2021 and then eight more times to welcome 2022. We cheered and wished everyone a happy new year. But after that, it was starboard watch’s time to lead the ship to El Hierro. I joined the tired people who had started to leave main deck to climb into their beds to get the well needed sleep.

I hope you had a beautiful New Year’s Eve and that you take care of each other at home!