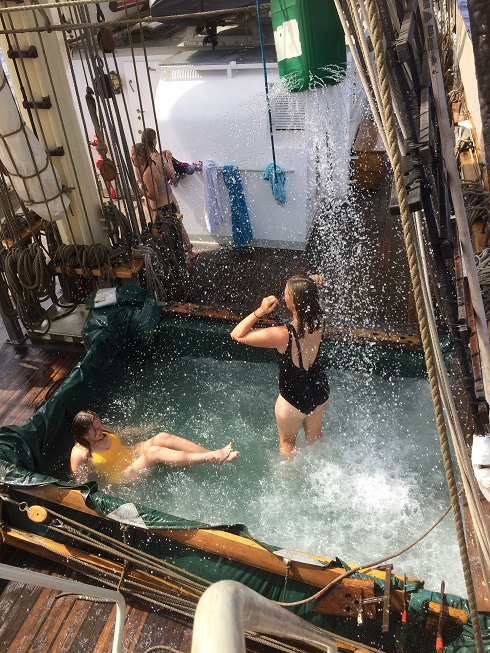 Hello guys!! Hope everyone is having a nice day.

Today I thought I was going to tell you about the night-watch we had yesterday. We started our watch at 12 pm, as we have done since we sat sails from Mindelo. The first thing we did was to koil the lines on deck.

After that our watch-leader told us to take a paper each from a block. Everyone was a bit confused at first but then she explained that we were going to compete. We were going to build boats out of the papers and lay them in the pool that our captain built on deck the day before. The owner whose boat floats the longest would win. We started to think and flip the papers in to boats. I believe me and my classmates never been so quiet. After about ten minutes everybody was done. We went down to the pool and sat our boats into the water, and then the competition started. Some of them were just floating fore a second. Others float for minutes and after a while, it was just the watch-leader and a classmate of mine left. Both of them were so proud that they were in the final and the excitement grew. But unlucky for my watch-leader, a big wave came and the water in the pool started to move around more. So her boat sank. After a few seconds of just standing there she said ”one more time” and everyone ran to the block of paper and stared to think and flip again. After the second competition was done and we hade a new winner, we laid down in each others knees on the bitern of the boat to learn about sailing words in english. It was one of the funniest and coziest watches we had since we left Mindelo.

At 04:00 our watch ended and we went to bed. When we are woken up in the morning we have about an hour to eat and get ready to start work at 12 am. Often when we have day-watch we do maintains-work on the boat. Right now we paint different places of the boat, like the navigating-cabin etc. So right now every single student have paint somewhere on their body. We look more like painters then students to be honest…

So, this was a ordinarie and good day here on the Atlantics. See you soon!