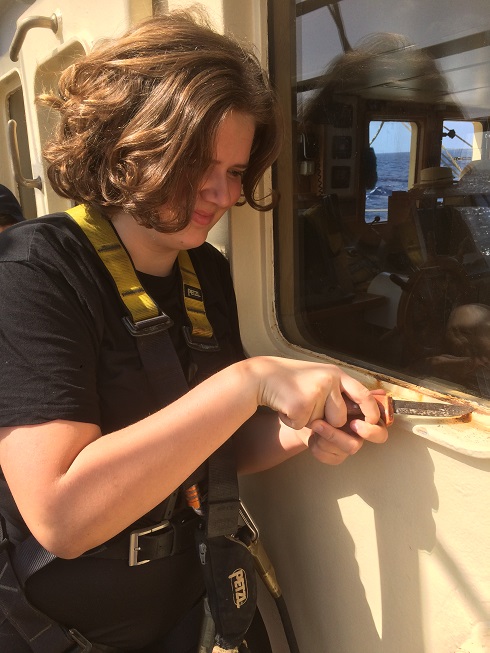 Day three of crossing the Atlantic. Today our boatsman tasked me and my friend
Malte with climbing up the masts for some maintenance work. More specifically;
greasing the sails leather details with sheep fat. It was pretty nice being up in the
rigging, I like it up there. It’s also nice to get to do something different than what we
do every day, I was glad to not have to work with rust removal.

The sun was shining and me and Malte had a pretty good time. We started with the
main mast and just when we were done greasing the royal , the top topsail, we
looked behind the stern of Gunilla. We looked down at our fishing lines that were
attached to the railing at the stern. And lo and behold, in the wake we spotted two
golden mackerels trying to catch the bait attached to our fishing lines. We shouted
down at the poop deck, “Fish!”, and saw our commanders run back and start hauling
away at the lines. One of the fish got away but they managed to catch one of them. It
was about a meter long and our first mate estimated that it weighed about eight kilos.
After watching our first mate filleting the fish we drank a couple glasses of water and
then climbed back up again and began working with the foremast. When we were
done with the (övermärs) we got called down for the 3 o’clock “fika”. We got ice
cream for fika, when we had eaten our three scoops of ice cream me and Malte
sneaked out on deck and then to the side of the kitchen where our friend who was
working for the day put a chocolate scoop each straight into the palms of our hands.
You have to be quick and sneaky when it comes to getting extra fika.
Leo Forshufvud, starboard watch