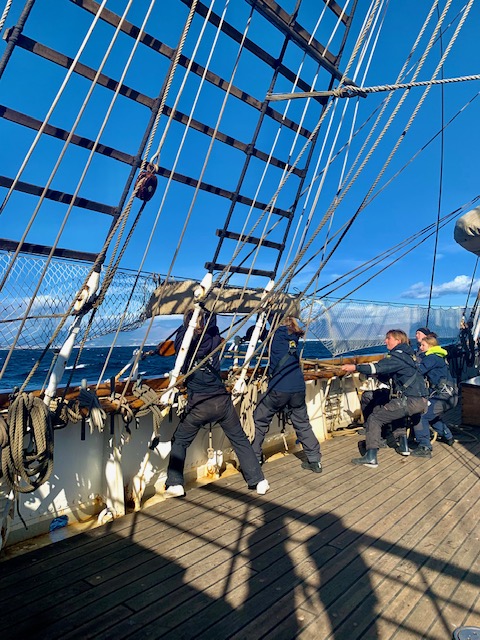 I´m back, your lucky day

The day started a little different this day, and I will tell you why.

Normally we wake up at 7,00, but this time we woke up 06,45 because the guard on deck needed some extra hands on deck. You see, the crew wanted to turn the skip around. So that was what we did. And it was so much fun. We all were so excited to work together. And when it was over the watch before went to bed, but we stead up.

My task this morning was to climb up the fore mast to the very top. Short story one the first trip I almost couldn’t clime to the first sail. So when I was up therefore the first time and didn’t get scared, I can’t describe the feeling. The feeling of overcoming one of your biggest fears. And standing up there I almost screamed in joy. The sea was calm the sunrise breath taking and me up there confident, joyful and most of all pride. I was pride of myself loving something that use to make me scared.

After lunch we prepared for a tacking, everybody was on deck. Tacking is when you turn the ship up in wind. And then through the wind. The reason why everybody was on deck was it were to much wind and steps to do as quick as possible. I loved it, being with everybody and doing something as a class the feeling is hard to describe.

The weather couldn’t be better. The sun kissed your cheeks and the ocean was as blue as it could be. And the dolphins joined the fun by racing the boat through the waves. The dolphins this trip are not as shy as they were on the first trip. It’s not often we don’t see them. When the tacking was over we began the journey in to the harbor.

The entrains to the flood was not the best. One side was full of oil and gas refinery, the water was brown and it didn’t seems promising. But the more we followed the river the more it seemed promising. Around 17 the bout laid in harbor.

Every time before we go on land we have an information meeting. It’s about how many we haft to be to go around in town, when we have to be on the boat and if we need some sort of ID. Around 18 a clock me and my friend went in to town. It was a good reload the batteries town. Not that big and not that small. As it darkens the Christmas light came on, and music on a were long street. The street was also full of people that wanted to the Christmas light. Let me give you a metaphor on have many people was on the street, : “ It was not corona friendly.” The light was so cozy.

The next task was to find some food, and we did! We found a restaurant that sold nachos and it was amazing. And to dessert a waffle with different types of chocolate on. After paying a visit to a food store we turned our heads to the bout. At first we got lost, but in the end we found our temporarily home.

Safe and sound home it was time for sleep and now this blog is about to end. But before I go I what to wish everybody that reads this a marry Christmas and a happy new year.

All the best, Alice Johannisson