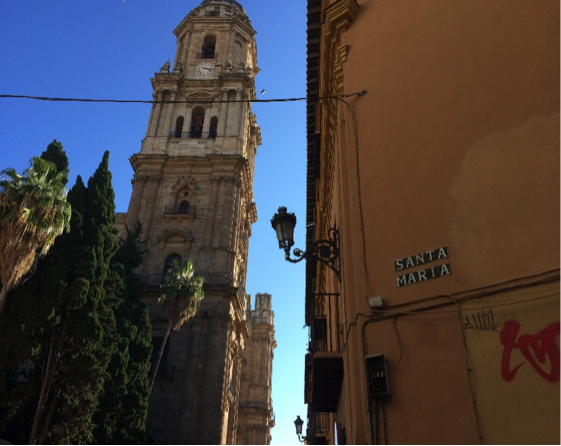 Buy churros, visit cathedrals, picasso museum or clean the toilets? Today some of us were more lucky than others…

When writing this, it´s half past eight in the evening and I´m lying at the front of the boat, looking out over the beautiful harbour of Malaga. The city lights mirrors in the clear and almost completely still water. Loads of people are calmy strolling along the quay in the light from the moon and the nearby restaurants. I could say without a doubt that almost every single person that walks by either casts a look of deep wonder or stops by for several minutes to observe the majestics of Gunilla, and I cant blame them, she is truly admiring.

This morning went by quite quickly and just before lunch we did a quick safety and emergency course on board, in case we would have to evacuate the boat. Our working group in stearboard had a restday today, beacause of all the hard work that had been done the previous two days… or maybe not. In reality we were just really lucky this time. While we were out exploring the historic sightseeings of Malaga, one of the other working groups were kept busy all day long, working in the kitchen and cleaning the toilets.

During our sparetime in harbour we tried to get as far away as possible from the most popular tourist places and really tried to find the idylic streets and alleys in the heart of the city, and we sure did. We wandered in between narrow antique stone buildings with balconies with hanging flowers and plants. We passed hundreds of picturesque apartment houses and cozy cafes`s and small sovenier shops. I believe we almost talked more spanish than English during the day actually, partially because of the lack of English skills but mostly because it´s a lot more fun experience. It´s an effective way to get easy laughs from the locals when trying to hold a decent conversation in spanish . But what we rellaly aimed for today was the cathedral that was situated only a 10 minute walk from the boat. It was enormous and also the most beautiful cathedral I have ever visited so far in my life. It was filmic, really. We had to bend are necks back a whole lot to catch the full height of it, and just then a cluster of whites doves flew off of the cathedral and into the blue sky.

We also went to the Pablo Picasso museum which of course was very interesting and so on, but wandering around in Malaga, talking a bit of spanish with the locals and buying churros, was just the right thing for me.