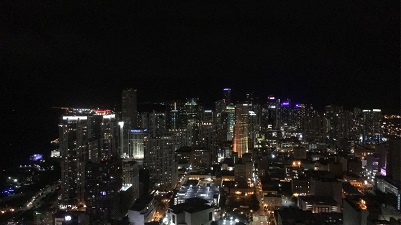 Miami from another view

Last night in Miami and even the las night at Gunilla fore this time. Today was the day when we clean the boat for a last time. But instead of cleaning for an hour we nearly spent the whole day. I was lucky that I got to spend the night in land.

Miami is like other American cities full of skyscrapers, me and my friends went to one of them. I don’t know how tall the building was but we got to see Miami from another view. After that we survived Miami downtown with the “Metromover”. It is like a subway but over the ground instance of under the ground. One station was named Miami Avenue and we think that it sound nice, but it was a disappointment, a rough street and not so many restaurants or store, one lonely seven eleven.

But now am I going to thanks Gunilla for this time, and in two days am I home in Sweden and I can slep when a want where ever that I want, eat when and where ever a want and I not going to spend two hours of the night to guard the gangplank. But I am sure that I will long back to Gunilla when a went home.