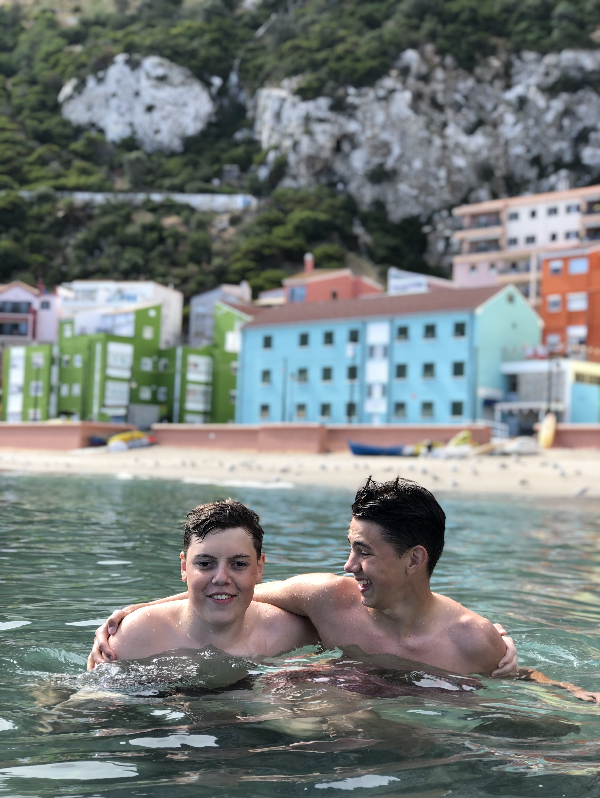 Today I woke up angry, but not long after I found myself on a beautiful beach and then celebrated victors birthday with a nice dinner.

Today Edwin woke me up at 11:30 am and told me to get ready for work. At first I thought he was joking, because I wasn’t prepared for that. I thought when it was time for me to go up I didn’t have to work because we were ment to already reached Gibraltar. When I understood that he wasn’t joking I was furious, but not long after, I heard the engines stop witch ment that we had reached are destination.

We went to the beach It took about forty-five minutes to get to the beach. The first beach we came across was nasty because there was a dumpster right beside it. We walked ten minutes further and reached a beautiful little paradise.

The water was crystal clear and the beach was surrounded by cute little buildings in vivid colours. Above the buildings rose high mountains where the monkeys lives. While floating around in the soothing water we could hear the monkeys screaming.

When we laid on the warm sand, an overweight brittish lady walked over to us and asked us for a favor. She wanted us to look for a silver ring that belonged to her grandsons friend. It was like searching for a needle in a haystack, so we didn’t put much effort in trying to find it.

After dinner, we went out again to watch sundown over the African mountains. That was a beautiful ending of a beautiful day.