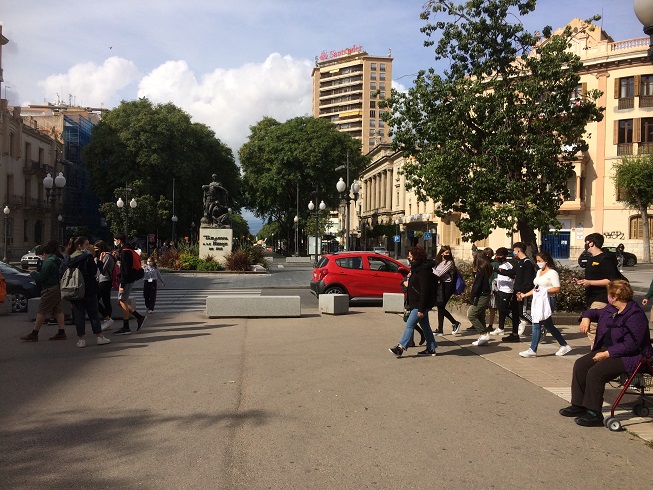 My day started around eight o’clock when my watch ended, and it was time for breakfast. Since it was Sunday the breakfast included egg and bacon, something many of us really enjoy, but I prefer yoghurt. When everyone was full and satisfied the time had come to amble down to bed and get some morning sleep before lunch.

If this would have been a regular day, we would by the time lunch ended have had lectures but because it was a Sunday, the only thing we had were a harbor evaluation. On this evaluation we also had a quiz on the harbors we have passed, Lübeck and Cherbourg. I almost believe that it went good for us in port-watch but we have not gotten any results yet.

After we had done our harbor evaluation with KiKi, the alarm started shelling and the lights went off, it was time for a safety drill. We have different safety drills with the chief almost every Sunday to prepare the crew on how to handle a crisis on Gunilla. The exercise this day included a fishing boat that had run into us and we started to take in water. Two persons had gotten hurt and one of my assignments in the situation was to comfort and calm down Lina who was said to have broken her legs. I also helped with carrying the two hurt onto deck. This exercise was one of the funniest we have had partly because of its action and real feeling, partly because I got to help out with something.

Another thing that is special with Sundays is that it is a big meeting with everyone on the boat. This means that everyone is collected on half deck to discuss their opinions. On the big meeting the need of taking care of the trash the right way was discussed. It was time for watch directly after the meeting and my duty was to stand post. I think that to be post is pretty boring, because standing still and watch the others work and talk with each other is not my favorite thing. With this said, the watch was still good. Something fascinating that happened was that we put all the sails up, every little sail that we have, even the missan who is almost never up. This gave us a good speed but also small problems for us that steered. The winds commuted between seven and twenty knots and were never stable which meant that one always got to be on its guard.

The last Sunday activity that happened before the new week started was a foresail cinema. The movie was “The lighthouse”, the popcorn was caramelized, and life was good. To watch a movie on the foresail is a cool experience but I was tired and knew that I would be woken up at four o’clock, so I decided to go to bed just as the movie started.

With popcorns in my stomach and the silence of sailing with the wind instead of machine the waves rocked me to sleep.