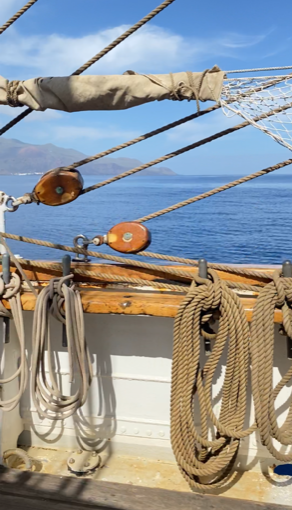 Today was a wonderful and very eventful day. It started with the usual line-up at 7 o’clock and with a little sadness in our hearts we started to get ready to leave the beautiful island El Hierro.

We are now on our way sailing to Santa Cruz de La Palma which is a one-day trip. I take comfort in the fact that La Palma also seems to be an exciting place.

The day’s first big event took place around 2 pm. A guy from our class came running down to all the cabins and shouted: ‘Man overboard!’ Now however you should not have a heart attack, this was all planned and something we were all prepared for. We hurried out on deck to take down all the sails as fast as possible. Then we were able to turn around and steer back to save cabbagehead Mr. Jansson who had fell overboard. It was not a human but a cabbagehead that helmsman Leo had threw overboard, to clarify. It was extremely dramatic and all of the students worked together as a team, better than ever to save poor Mr. Jansson. After a smooth turn and launch of our small lifeboat we managed to save our beloved cabbagehead.

To celebrate our successful rescue effort our captain Torben decided that we would stop the boat to go for a swim. It was wonderful and the sun was shining. The temperature in the sea was about 19 degrees and the water was extremely clear and blue. After just a few minutes of swimming something happened, which I will never forget. Someone onboard suddenly started to shout excitedly and pointed to the sea. I turned around and saw a large dark back of a whale, which in my estimation was only 300 meters away. Full of adrenaline in my body I saw how the whale appeared and then disappeared in the deep water. I was euphoric for several hours after this experience and could not stop thinking about what had happened.

During the night shift I was extremely tired and seasick. Everything felt quite dull, but it quickly changed for the better. This since a group of dolphins came and lit up the dark water as it left a trail of shimmering mareel behind.

I would say this has been one of the best and most eventful days of the trip so far. I am sure I will carry this day with me as a happy memory for the rest of my life.