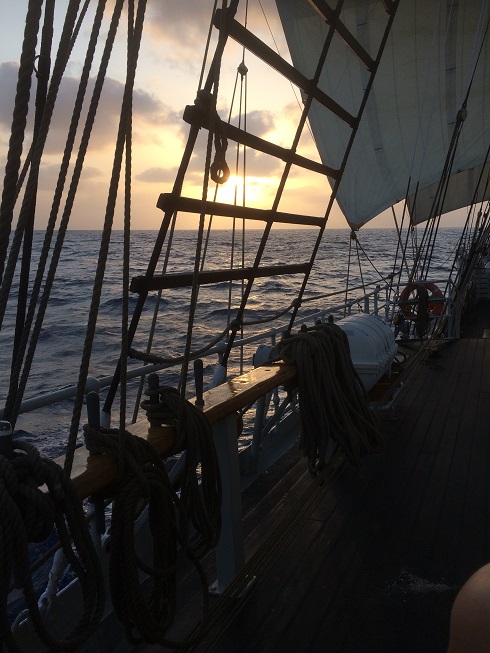 The 7th day on the Atlantic sea!

Today am I, Sara Leffler, the blogger!!!!
The day started at 3.30 am. The ”rondman” knocked on my cabins door and had the morning wake up-speach that they have every morning when they try to wake us up. The rule or more like script has the captain Torben teached us many times because everybody thinks the ”purrning”, when the ”rondman” wakes us up, is bad.

. Nobody ever wake up. But the first step in the script is to say goodmorning with a nice voice, telling everybody what time it is so we know if it is watch in the morning or in the night, it is impossible to know that when you are laying down in your bunk because you can`t see any lights exept for the discusting lamp. And after the ”rondman” has told us what time it is do he/she tell us what he/she recommend us to wear dependning on the weather. Then he/she put the light on and hope that one of the cabinmembers has waken up, if nobody has do he/she need to keep the awkward monolog going until anyone answers. I love being ”rondman” because you do your own stuff all day on the watch. You wash laundary, go see so the machine is doing great, and also see so every other machine-alike things is doing great. But the last part of it is the worst, the ”purrning”!!!! It is super awkward and annoying because nobody ever answer even though they are awake.

The day started by taking the ”moonwalk” as our watchleaders says, that is the first activity we do in the morning. We climb up in the rigg and chill there for a while. After we have done that is it always perfect timeing for the nightsnack at 5 o’clock am. This day did we ate pizzabuns which were delicius, the best pizzabuns i’ve ever eaten!!!! Good job Liv and Sigrid.

The day continued as all of the other days here on the Atlantic-sea. It feels like we live with no time in a capsule by our own, which is true. I would lie if I say that I don’t like it, I find it very relaxing when I don’t get any meassages from my family and friends, even thogh I miss the super much. It also feels relaxing having no idea about what is going on in the world!

Mum and dad, I used all my internet the first day so that is the reason I don’t answer your meassages!