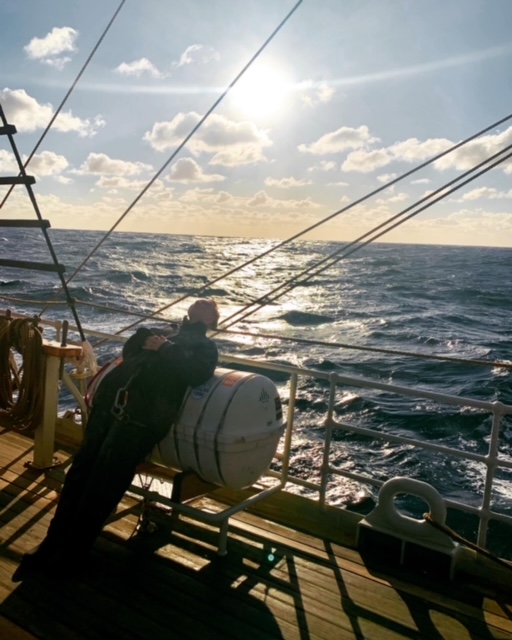 I was woken up by a high warning alarm that ringed in my ears. Me and my cabin mate rushed up and started to put on our clothes. It’s a fire…

I was woken up by a high warning alarm that ringed in my ears. Me and my cabin mate rushed up and started to put on our clothes. It’s burning, I thought. We ran out in the corridor only to see how the rondman pushed back the water doors. It turned out that the ship leaned so much that the water doors had basically started to close themselves and therefore the alarm. It was simply just to fall asleep again despite the hard sea.

I woke up again at 7 am when the rondman came to wake us up. Because of the hard wind I had had a hard time sleeping since every other second I stood up, to then hit my head into the walls of my cabin two seconds later.

In the beginning of the watch we needed to take down some sails, super quickly, since the wind got stronger again. The rest of the watch, I spent scratching color from planks on the poop deck. Not a super fun job if I’m being honest but after 4 hours, the watch was finally over and we were ready for lunch. Lunch today was a super tasty beef stew.

After lunch it was time for lessons, and as usual I worked super focused throughout the entire class. Jokes aside, the nap was wonderful. When I woke up it was time for dinner and then it was back to work again.

During this watch, instead of scratching color for 3 hour straight, I was post, and therefore staring out into the sea for four hour. Although it may not sound like it, the days here on board are normally quite active and it was therefore nice to have a calm night watch. After the end of the watch, it was finally time to go to bed again.