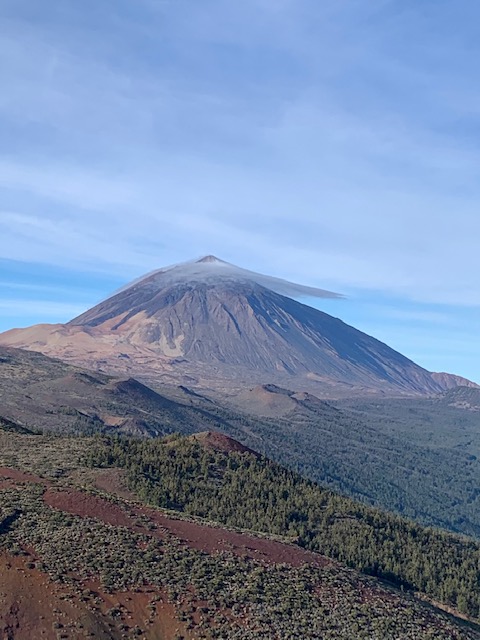 The amazing ”climb” of mount Teide

After going up the volcanic mountain called Teide we sat on a mountain terrasse just looking out over the beautiful island of Tenerife and admiring the view.

Today has been an amazing day. I started it by sleeping through breakfast and waking up five minutes before morning assembly. After the usual assembly I got to eat some breakfast anyway since the breakfast hadn’t been taken away yet. I also made myself a sandwich that I could bring to the field trip later.

At 9 o’clock it was time to leave Gunilla because we were going to try to climb mount Teide, or at least so we thought. After leaving the port the bus started driving, we got to see some amazing views while driving up the mountain. We got higher and higher up the mountain and got up to something that surprised the most of us. We got up to a pine forest, extremely surprising. Apparently, the island of Tenerife has five different climate zones and we had just crossed the line to a different one, the sudden change of environment certainly surprised us.

Now being well on our way up we got to our first stop which was a nice little restaurant/souvenir shop where I go one of the best hot chocolate I’ve ever tasted.

Going on we stopped once more at a really cool stop in the middle of the road called la tarta which means “the cake” it was layers on layers with hardened lava that has poured out of some of the islands many volcanos.

After our two stops on the way up we finally reached the highest point we could get to by vehicle. At this point we thought that it was time to hike at least a bit up along Teide since we got told to prepare for a hike. But no well up at this point we got to walk around for an hour just looking out at the amazing view from this point. We had gotten up somewhere along 2000 meters above sea. Not getting to the top maybe was a little disappointing but the view from this point wasn’t anything bad at all. We got an amazing day to do this trip since there wasn’t any clouds and a blazing sun. After an hour we started going down again and got stop twice on the way back. Once at just a toilet break were the cabin up to the summit goes if you want to take that route. And then we stopped at a lookout where you could see all of Puerto de la Cruz. After that we drove back to the port and ate some lunch.

After lunch on the boat I stayed a while to rest for maybe an hour to later go out. I went out with some people, and we just started wandering about in the city looking for shops and cafes. We ate churros and drank coffee at a nice little café. Going on we visited some shops looking at clothes (didn’t find anything niceL except a plaine white t-shirt). We finished the day of at a nice little Asian restaurant where we ate some amazing food.