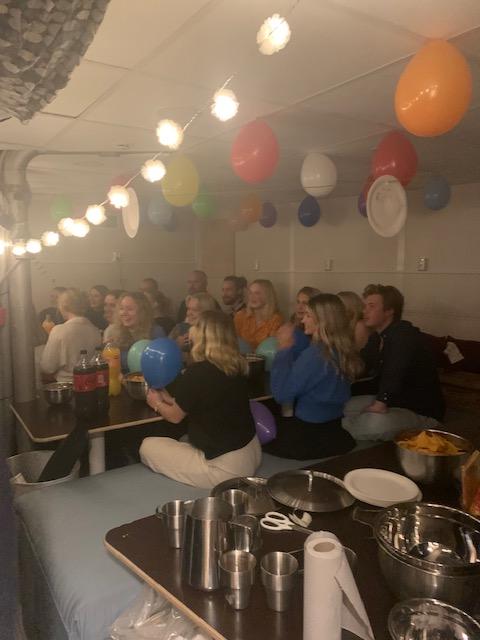 My teacher always says that our blogs should start off with an inspiring and interesting preamble that make our readers want to continue learning about our voyages.

But to be honest I find it quite hard to write a good blog entry when I spent the majority of the day sitting still, guarding the ship and keeping everyone’s shipping books in order.

So if you haven’t figured out, with the help of my really interesting and inspiring preamble that I’ve been on guard duty all day, you now know. As a ship guard you watch the ship from eight o’clock in the morning to about half past six in the evening. The guards have a certain number of tasks you need to perform at certain times. Every hour you need to check almost every room in the ship to make sure that there are no dangers occurring such as fires, water leaks or chemical leaks or maybe an overflowing toilet or two. You also need to wash and fold laundry as soon as the machines are done to keep up with all the dirty laundry that our crew produces. Every four hours the ship guards follow the previous list of assignments but they write down different things on a list such as values from the machines in the engine room or the fridges and freezers temperatures. The remaining time you sit still at the gangway with your partner and make sure that the ship remains free from intruders and that the hawsers don’t suffer any breakage. I spent the most of the day with my classmate and friend named Estelle. In between laundry folding and keeping chech of any dangers around the ship we made time pass through conversation, which was really nice and cozy since it was raining and we were sitting under the portable sunroof on half deck. When the clock finally passed half past six me and Estelle were replaced by our classmates and we were allowed to leave half deck.

After our long day of guarding the ship we started preparing for the afternoons party that our classmates had planned along with our teacher. Our study hall and living-room had been as completed as can be right now and we going to throw a party to celebrate. Our study hall’s name in Swedish is “Stora Mässen” which would be directly translated to “big living-room” and instead of calling it just that, a big living room, when we speak English we call it The Big Mess, a name that quite suits the recent situation down there. At around ten o’clock almost everyone on board had gathered in the big mess. Our classmates had arranged a really fun show, where they ran around covered in blue sheets pretending to be waves meanwhile the main theme song from Pirates of The Caribbean were playing and one of them held a welcome speech. Afterwards we ate a lot of nachos with guacamole and played a game of finishing song lyrics. About two hours later the party was over and everyone quickly went to bed. I made a late call to a good friend of mine that I haven’t spoken to in a while and soon I joined the rest of my friends in our bunk beds.