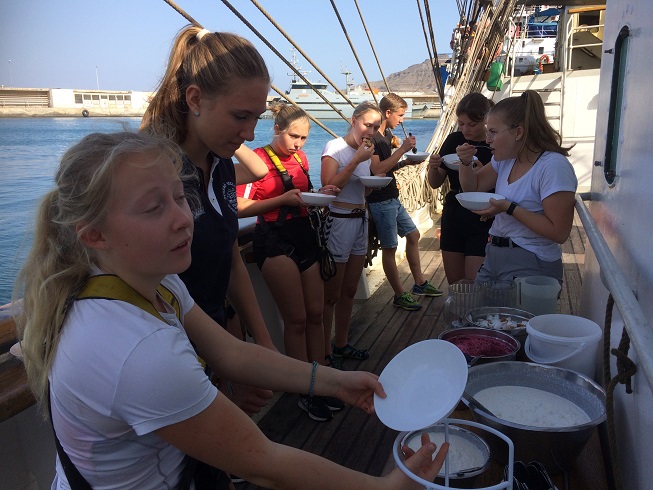 The day started in the best possible way. I was awakened very calmly by my friend Hedvig. I
usually struggle to wake up in the morning, but today I woke up pretty easily. Hedvig had to wake
everyone, and she wondered if I wanted to help her do it in a more fun way than usual.

She had a great idea. I picked up my speaker from my locker and looked up an aggressive song on Spotify. After that we put on the music at the highest volume and began to wake everyone. We kicked in the doors, turned the lights on and began to dance. Some got really angry, but others loved it and started to dance with us. The most important thing was that everyone woke up, which they did. For breakfast we got rice porridge that was leftovers from yesterday. I love rice porridge but there wasn´t much left so I didn´t get so much.

This day, midships were on watch and we had to clean everything after Christmas Eve which was yesterday. The toilets were not cleaned on Christmas Eve so they were very disgusting. All the christmas decorations had fallen down from the ceiling and the walls, and the kitchen was full of dishes. I was the cleaning boss so I decided what everyone would clean. Because of the mess, it
took a very long time to clean everything, almost two hours. When we were done with the cleaning we had to wash all the mattresses in the big mess. The mattresses were really disgusting and smelled terrible. It took hours to get away all dirt but despite that I couldn´t se any difference. It felt a bit strange to clean so much on the day after Christmas Eve since i usally dont celebrate with my
43 classmates. It was a hard days work indeed, but it was worth it in the end because of the nice christmas the day before.