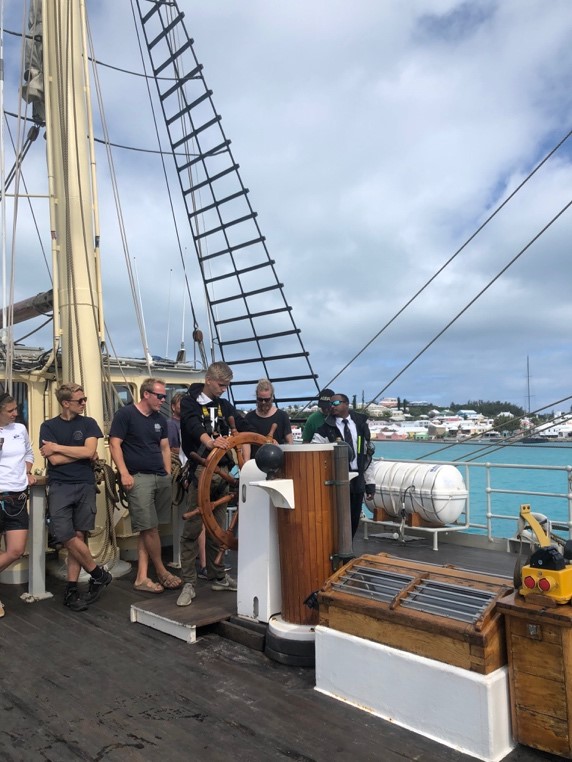 The time has come for us to leave the beautiful island Bermuda, and some of us are more exited about it than others. For this sailing period we have all changed shifts so everyone is a bit confused about when to eat, sleep and study but hopefully we’ll get used to it.

This morning everyone woke up for both good and bad news. At the lineup eight o’clock after breakfast we welcomed Torben, our new captain. Unfortunately, we also had to say goodbye to Hans, the old captain, and the trainee Irma who decided to leave the ship today. Many of her friends, including me, cried and waved her goodbye when leaving for the two-week long trip over the Atlantic Ocean.

Immediately when the ship was leaving the port it started to get very windy. Many of us already felt ill after just half an hour, and when I say many I actually mean half of the trainees. People also start to miss their parents, especially when knowing we are so far from home, so this trip started a bit shaky.

Anyway, move on to happier stories. Our second mate Leo had his birthday today and because of that we ate ice cream and he had the honor to set the royal, which is the highest sail in our masts. The rest of the trainees in the watch set all the other sails so we could turn of the engine and have a true sailing experience. We didn’t have any lessons the first day out on the sea so most people slept both before and after the watch to catch up on some sleep.

There is not so much more to say about this first day but I hope we’ll survive all the way to the Azores.