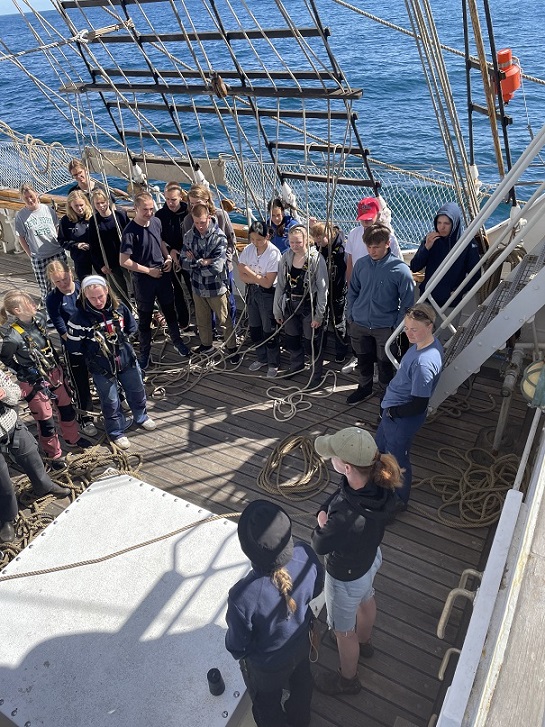 The alarm went off at 03:25 like it always does. After laying in bed for five minutes wishing I can go back to sleep the “rondman” woke me and my roommates and the day started. We put on our clothes after the “rondmans” instruction. Then we did go up on deck and then our shift started. I thought the day would be the same as it usually is but today was different which was a pleasant surprise.

The first thing we did when our shift started was climbing up the mast. Me and my friends sat there for about a half an hour. We talked about how we were so excited to get to Plymouth and then we just talked about random stuff. After being 7 days at sea with nothing else but the ocean as view I really want to get to land. It is nice and powerful being at sea for this long but I am missing not rolling around all the time. Unfortunately I have been seasick so I haven't been capable of working so much but now I am one my legs again and are ready to work. At 05:00 am we had to scrub the deck. I don't actually think it is so boring but we have done more exciting things. Our guard always scrub the deck and the other guards have different assignments. Like “babord” has to clean the toilets and the corridors. So I think our task is pretty good.

When our shift was over at 08:00 am I decided to go to “stora mässen” which is like a living room and dining hall. My original plan was to do some school work but after a long morning I fell asleep on the comfortable couch.You aren't actually allowed to sleep there but they are so nice it's hard not to. I woke up again at 11:40 am and went directly to lunch. After we had lunch we had classes which we have everyday except on sundays. We had physics lessons and our job was to find out how fast the boat went without looking at the electronic devices where you can see it. It was actually fun and we succeeded. I think…Anyway we were happy with our results. Our afternoon “fika” was then served and it was a cinnamon bun which was exactly what I needed after a pretty tough day.

At 15:30 pm the highlight of the day started which was the Gunilla Olympics. It is a competition between all the guards and the leaders. The first competition was a “kviling” competition” This means we had to make sure all the ropes were hung up on their places and make them look nice and not tangled. It wasn't really a fair fight because the leaders were only four and we are fifteen even if they are really good at it. And we students weren't so nice when we tangeld them so they would be really hard to get up. My guard wasn't the fastest either but that's okay we have more tries. Right after we were done my second shift of the day started. We didn't do so much but we had a good time and did some knots. Knots are the new favorite thing to do in my guard and it is fun and we are getting really good. The last thing we did on our shift was to drink some tea and talk about what we wanted to do on the night shift. Right after we went directly to “stora mässen” to watch Annabell because you know it is actually Friday the thirteenth. So watch out.