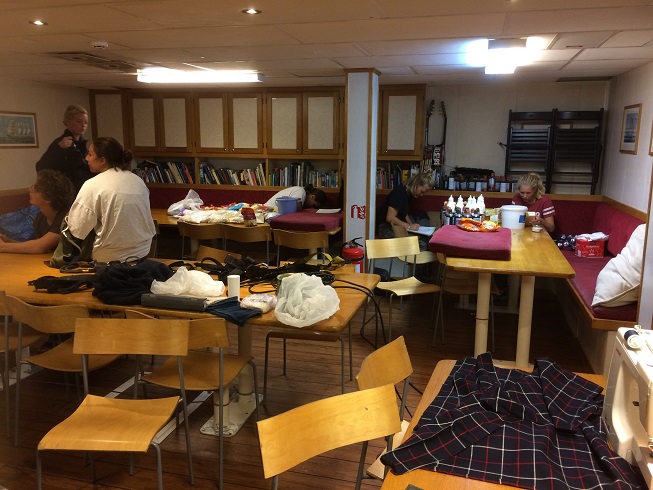 Today has been a wonderful day, mostly. We had a very chill night watch which was really nice and necessary since we all still were very exhausted from yesterday’s watch.

On yesterday’s watch, we beat the sailing speed record and sailed in 14.2 knots! The watch was extremely intense and we didn’t get to rest at all. We set sails, furled sails, trimmed sails and lots more! Because of this we had a less intense watch during the night, also since the wind was lighter. For the first hour we braced some sails and then got to lie down on quarterdeck and watch the stars. It was amazing. I saw at least 8 shooting stars, where one of them was probably the strongest and longest shooting star I’ve ever seen. It was extremely shining white and left a long line behind it for at least a second, very unrealistic. After that, my friend and I “slutstädade” behind the drawers under our beds in our cabins. With “slutstäda” we mean emptying the area, cleaning the various things, vacuuming and cleaning the area and then putting everything back. Due to the lack of sleep and the fact that it was 3 in the morning, this was a hard task to fulfill but eventually we managed :) The watch ended at 4 in the morning and immediately after it ended, I went to bed to get as much sleep as possible before getting woken up again to prepare for the 12-16 watch.

During this watch, at noon, I was a galley rat (backis) with my friend Esmeralda. We had a very good and appreciated watch, since we worked during the 15 fika. We served an extremely delicious lemon meringue pie that the chefs had baked and everybody was happy and satisfied with it, including me. We also prepared dinner and did the dishes.

After the afternoon watch I tried studying but sadly didn’t get too much done, so I decided to train a little with my friends (which we have to do in PHE) and it was surprisingly nice to get over with. The day ended with a few more lessons, dinner and a good night sleep.