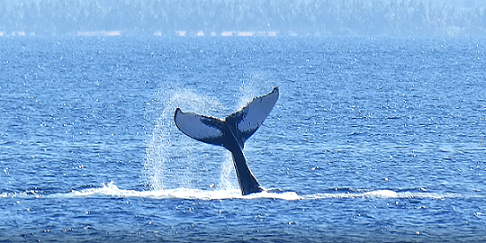 ” There is a whale over there!”

What an eventful day. Cleaning, meeting and some whales. A perfect day to write a blog.

It’s the second day at the last sea leg. It´s only supposed to be eight days but I think its going to feel like one of the longest sea legs on the whole trip, and the Atlantic was seventeen days. That’s because the adventure is almost over, and I think I speak for everyone when I say that we are ready to come home. After eight weeks,this boat has become smaller and smaller, but also dirtier and dirtier. I haven’t really noticed how dirty everything is until this week. We have started to clean every inch of the entire boat and it’s a lot of work. We are sitting and scraping away dirt in the corners with toothpicks. I understand why we clean so much; we are more than fifty people living on this boat, but we, or at least I have never cleaned so neatly at home before. I have heard that many parents think this is a good thing that we clean so much. When I told my parents how much we cleaned they laughed and said, “your room is going to be so clean when you come home”. I can honestly say that I’m not going to clean at home for a while.

The first thing on my bucket list on this trip was to se a whale and today I can cross that of my list. Our previous bosun had a big interest for whales so sometimes we had lessons with her where she taught us all sorts of information about all kinds of cool whales. They were the best lessons on the boat. She came up with a whale bingo where we could cross over the wales we saw during the entire trip and if we got three in a row we would get a price. Today we won. We sailed through a bay were the crew said that it´s common to se some whales. Everyone was excited and on their toes. Especially the lookout. Sometime around eleven o’clock, the first shout came. “Whale, there is a whale over there”. Everyone ran to port side and stared out over the open ocean. At first, I thought she made it up or just saw something else but after a little while I saw the fin as well. It was a very cool feeling to see such a huge animal swimming near you. We continued to se some whales but they weren’t so close so you couldn’t really get a good picture at it, but then, suddenly a fin stuck up from the water close to the boat and started bottle around. I have never seen such thing but I hope to do it again. Hope everything is all right wherever you are, se you soon.