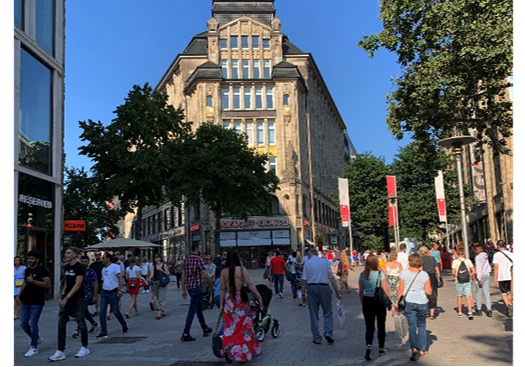 The streets of Hamburg

A sunny day in Hamburg with a lot of food and shopping.

This morning I got woken up at 6 am instead of 7 am because it was my turn to work in the galley, the kitchen, so me and the other “galley rats” had to wake up a little bit earlier to have enough time to prepare the breakfast for the crew. It was done around 7 am and when everyone had eaten up we had a line-up at the main deck, where I got to raise the German flag. Because we are in Lübeck, Germany, at the moment.

Afterwards me and my friends decided to go to Hamburg, so we hurried to make it to the train in time and we made it and arrived in Hamburg around 10 o´clock. After the train trip we got a little bit hungry so we looked for somewhere to get something to eat. We found a nice Italian café, called Prego, where I ordered a croissant with Nutella. Then we went shopping in some small boutiques around the town.

After some shopping we took a lunchbreak at Peter Pan, a nice hamburger restaurant where I ordered a classic hamburger which I thought was very tasty but it was huge so it took a while to finish it. Afterwards we got frozen yoghurt with fruit sauce as desert which also was very good. Then we strolled around the streets of Hamburg but there was not so much to see left so we started to walk against the train station. When we got there we saw that the train back to Lübeck was not leaving until the next hour. So we went to Starbucks and waited there for a while. When it was 10 minutes left we went back to the train. There we met Brita, our dos at Gunilla, and some other mates. We waited for the train together for a bit. Eventually it came and we traveled for about 50 minutes. I was so tired from all the walking so I fell asleep on the train.

When we arrived to Lübeck we walked home to Gunilla. We left the things we bought at home and then we strolled in to Lübeck again to eat dinner. Some classmates recommended a sushi place in the neighborhood so we went there and ate. Afterwards we went shopping some food. Since we are leaving Lübeck soon, we need some snacks for the time when we are at sea. So I bought some Swedish cinnamon buns, called Gifflar. Then we wandered back home through the city and when we arrived I started writing a little bit on this blog but then I got tired and went to my cabin and slept like a baby until I was woken up the next morning.