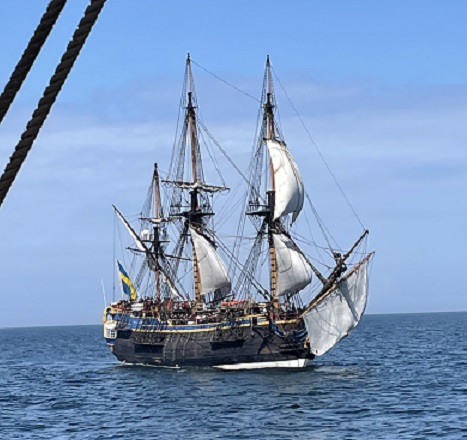 Today, I woke up at 07:00 am. It’s our last sailing day today. I went up to have some porridge and then the captain came to the breakfast and told us that the ship Götheborg was close to us. We all got very excited and asked if we were gonna be able to meet her. The captain didn’t know if that was possible. And the day went on from there…

So when I finished breakfast I went outside to call my father who works with the ship Götheborg. He's not on the boat. I called him to ask if there was a possibility for us to meet up with Götheborg. The captain on Götheborg is also captain here on Gunilla and when we boarded Gunilla he was captain the first two days. He didn’t really have time to talk but I asked him and he sounded like he was gonna do something about it. After I went down to my room to change before my watch started. I went out and we had the watches switched.

Today I was on watch so at first I stood helmsmans for half an hour. And after about ten minutes The Swedish ship Götheborg is calling us on the radio. They wondered if we wanted to meet up and sail with them for a bit. The captain said yes and they made a plan. Then I was lifebuoys watch for the next half hour. And after being lifebuoys watch I went to the foredeck and was lookout for half an hour. Right before it was time for me to go back to being helmsmans I saw her on the horizon! It was just a withe little dot at the beginning but when I came back to being my lookout again she was close. And we were moving fast towards each other. And when we were close enough both ships turned the same way so we could sail with each other for some time. We let them sail past us and then we sailed past them faster and before we sailed past them when we were side to side they shot a salute. And right after that my watch ended and we went for lunch. After lunch I helped the other on watch lash the sails. It took like one and half an hour to lash every sail nicely. After that I went to finish my last studies before we come home.

Later around four we anchored outside Öckerö. It was a long and great day!