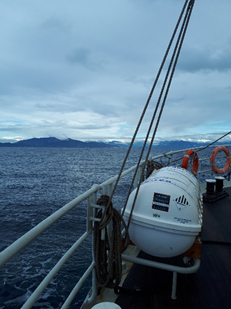 Today we left Ajaccio, which happened one day earlier than planned because of the weather. Amazing views and experiences happened on the way to our next location, Alghero.

We left 10 o'clock in the morning with a little help from the pilots. The trip started pretty slow with no wind and it was cold as well. There was snow on top of the mountains and the sun was nowhere to be found on the cloud filled sky.

In the middle of the day, we had a medical practice where the fire alarm went off. Some of us slept, some of us studied and some of us took a shower as the alarm went off. When we came up onto the main deck, our second chef was laying down on deck. We talked about what to do when someone has gotten hurt and also how to do it.

Something amazing also happened today in the middle of the medical practice. Our second officer shouted out to pause the exercise, because there was a whale beside us on the starboard hand. Everyone walked fast to look after the whale, and after some stressed searching we saw it as it breached the surface. There wasn’t just one whale, however, there were two. We saw them spray water when they came up to the surface of the water to breathe, and the whale fin of one of them as it dived into the water. It was really beautiful and a memory for life.

We, the people in starboard, didn’t have anything to do at our night shift except for two brave persons that climbed up in the mast, even if the wind was strong and the waves were big and high. They were 3-5 meters high and reached the poop deck.

Even if it was very windy, the sky was clear and the stars twinkled. The day ended with a flag game with our watch leader.