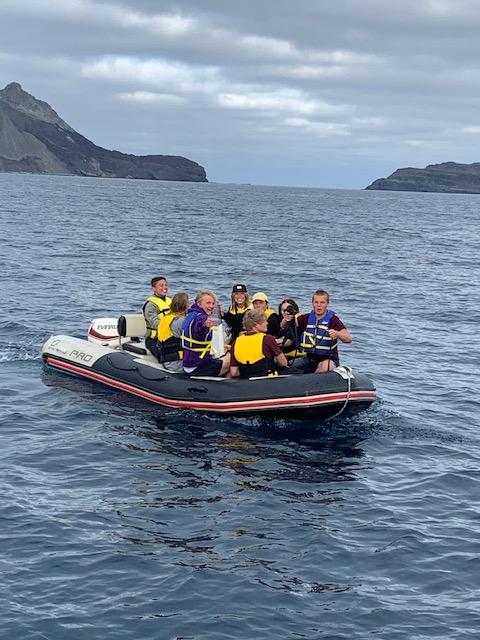 The day starts like every other day, we get “purrade” at 7 am. Then we had breakfast, and after that, morning line-up.

Last night we had to leave our quay place in the harbour of Porto Santo. That was because waves from the north Atlantic meandered into the port, which made Gunilla swing up and down. Since we didn’t want this to ruin too many ropes, we left the port and went a bit outside the coast to set anchor. Therefore the group with a day off today had to leave Gunilla with our small boat, Berit in the morning to spend the day on one of Europe's longest beaches. It’s as long as 6 kilometres.

Amidships, my guard had watch today. Some of us spent the day in the kitchen til 12 o’clock, like me Olivia and Vilma. We sang along to songs from the movie Frozen and “Olivia” which is a song by the band One direction. The music played meanwhile the other had their pre-noon snack at 10 o’clock in the sun outside the kitchen.

The rest of Amidship spent the morning climbing up the rig and tore wires. To protect their clothes they wore black overalls and a white scarf over their hair. The smell from the tar spread all over the boat, and their overalls got dirty.

Tonight we are leaving Porto Santo and the Madeira islands to sail south towards the canary islands. Next stop is now La Gomera, so we have four sailing days in front of us. Because we had watch today we stayed at Gunilla but got off after lunch. So now we are sleeping, studying and showering before we get on again on the 8-12 watch. Right now am I sitting on the deck in the front, waiting for dinner. The sunset over the small island Porto Santo is magic right now. The long beach, the ocean and the green mountain-tops are colored by the sun. Some parts of the city have already become darker and the humid trade winds create fog along the mountains.