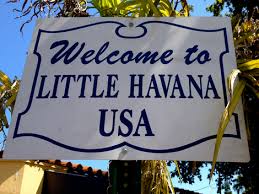 Heading towards the bus waiting for us we encountered some minor problems at the customs still we were out of the airport in less than two hours with the most time consuming process being finding the right bags.

At 6 a clock in the morning our journey began with the bus leaving the parking lot. We would be away from home for the coming 68 days, crossing the Atlantic, visiting 5 foreign ports and having the adventure of a lifetime whilst studying. That bus brought us to Arlanda airport, Stockholm, from where we took a Boeing 787 Dreamliner over to Miami, Florida.

Watching through the airplane windows I think most of us were slightly disappointed with the weather. With clouds covering the sky and the sun setting it wasn’t the Miami most were hoping for. Yet walking down the stairs hot humid air struck us and suddenly the airplane we left felt cool. Outside it was about 25 degrees Celsius but the humid air brought a heat quite different from the Sweden we had left. Most were dressed for Sweden’s cooler climate and the sweat started running quickly.

Heading towards the bus waiting for us we encountered some minor problems at the customs still we were out of the airport in less than two hours with the most time consuming process being finding the right bags.

Arrival at the boat made the excitement rise again after being suffocated by the long trip. Everybody went from just wanting to sleep too that most packed up their bags, grabbed a meal, showered and went about all over the boat talking. Few went to sleep earlier than 2 hours after arrival.

The next day we woke up at 7. As usual Sunday means fried breakfast including bacon, fried potatoes, and fried eggs, plus the usual. At the table there were lots of tired gazes, yet in a way filled with energy and expectations.

The activity for the day was to go through the boat and getting familiar with it. We went over the safety, climbed the rig and so on. At 16 half of the students started with a first lecture going through the assignments for Miami whilst the rest were on watch, cleaning the boat.

After the lecture everyone not on watch were free to go into the city, suddenly the boat was kind of empty. For the ones who stayed a group of dolphins swam in and out of the harbour and a manatee showered in the cooling water pouring out of Gunilla. Marine life and climbing to catch the sunset and view of the Miami skyline was what you got if you stayed and otherwise you got to see the city and do some shopping, a win-win. Another thing noted today that caused talk about going for a swim was that the water temperature is 23,7 degrees Celsius although I haven’t heard of anyone who’s taken a swim yet.

That’s all for now, we’re all psyched and are truly looking forward to sailing but the jetlag hit most of us hard as well. With some sleep we’ll make do but from the ones who had their first class there seems like it will be quite a lot schoolwork to do also, not only sunshine and dolphins.