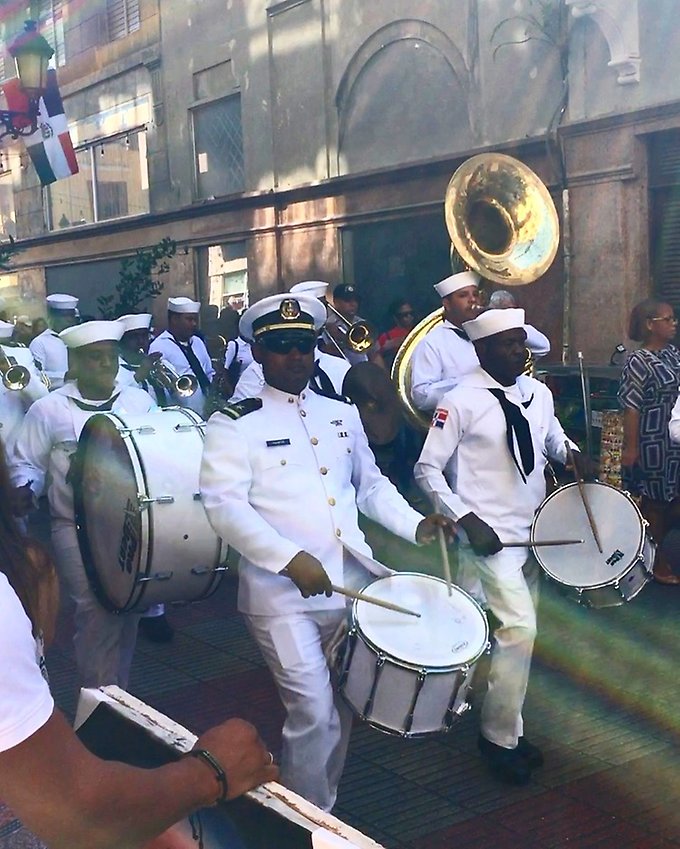 Yesterday we arrived to the Dominican Republic but then it was watch day for starboard (my watch). So today was our first day out exploring Santo Domingo and I already love it. Domincan Republic has such a great energy and the people are really nice.

We started the day with exploring the main street in Santo Domingo. At first in the morning there wasn´t many poeple on the street but later on there was a parade in honor of Juan Pablo Duarte. There was an orcester, civils walking around with the Dominican flag and there was also many schoolclasses from diffrent schools who was marching in the parade. Today I learned that Juan Pablo Duarte is one of the countries three fathers and he is one of the most famous persons in the Dominican Republic history. I think he faught against and pushed back Haiti in the indepence fight between the two countries.

After we walked around the street watching the parade and all the beautiful paintings who are everywere on the streets me and my friends decided to go to the botanic garden in the city. It was lovely and we even went on a guided tour in a mini train. When we arrived to the japanse garden who is a part of the botanic garden we saw a qfshbn(15). The girl who was turning fithteen had a beautiful white dress and they was having a photoshoot in the garden with big silver ballons that said fifhteen. There was also a big cake waiting for the celebration and well dresses guest there to celebrate her big day. It was cool and fun to see how big and importent the tradition is here beacuse nothing speciel happens in Sweden when you turn fithteen.

Later in the day when we arrived to the boat just in time for dinner we got to know that it was tacos for dinner. We almost screamed of happiness, they had even made guacamole. I´ve been craving tacos so bad for the last two months so this was so amazing.

After dinner in the evening half of the class went to a bar to dance merengue. Merengue is a famous Dominican dance that everyone who lives here can dance. It was fun but we dind´t learn so many steps so it got boring pretty fast. At leat I had really good company and it was great to see and learn more about the culture here.

Overall I had a really great day in a new country with some of my favorite poeple.