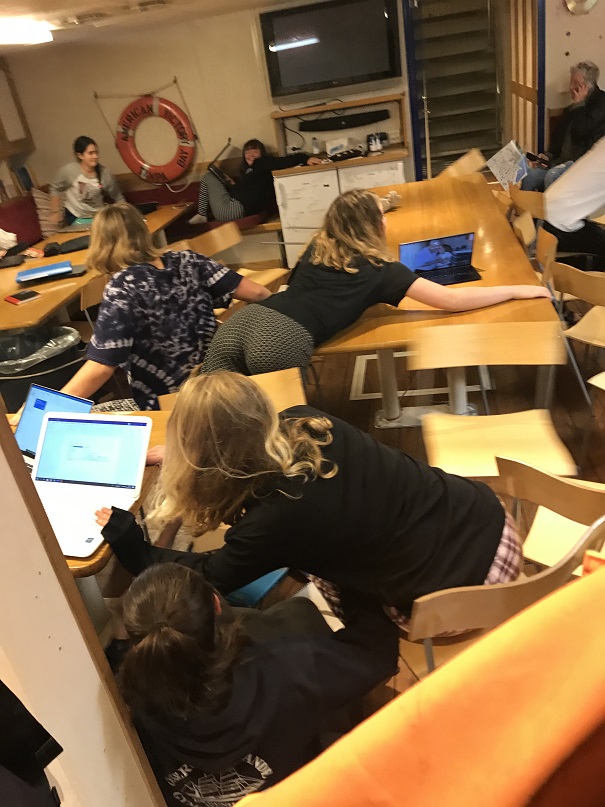 A big mess in the Big Mess

After a calm and cosy 00:00 – 04:00 watch, with a lot of singing in the pouring rain, Portside woke up to the loud, grinding sound of falling chairs moving around in “Stora mässen” – in English: The Big Mess.

The Big Mess is Gunilla´s largest room where we are studying, having meals together when we´re in harbour or just where we hang out. It isn´t usually a big mess in here but today was an exception.

Most of us had a hard time sleeping after our watch because of the tilting forward and backward. We really thought it was a storm. Personally, I would say that it was a storm but our watch-leader didn´t think so. She said that “you can only call the waves high when they´re covering the horizon”. Still, there were very high waves that swept over the deck and the rain made it hard to see your own hands in front of you. It is a pretty weird feeling to be surrounded by water and only water. There is water falling from the sky, flushing below your feet, everywhere by your sides and the ocean is the only thing existing as far as you can see. When we came up to quarterdeck, we hooked our harness to ropes tied as an H to low the risk of falling off deck. The risk of console was high because of the weather I guess so most of the time we just sat down and made knots, played “Kejsaren av Kina” (the emperor of China) and sang childhood-songs together. Even though we were wet down to the skin and tired after the night of bad sleeping, we felt joy.

But I felt even more happy when I heard the eight bell, meaning our four hours of watch was over, and we went inside to change clothes. We ate some “fika” and it really sounded like a storm had found its way into the galley (the kitchen). 4:20 PM started the first class of the day. Both watches, port and starboard, sat in the Big Mess when the wind and waves made Gunilla list and sway as never before. I sat on a chair which moved back- and forward over the whole room at least 5 to 6 times. There was not much anyone could do about it. It reminded me of a roller-coaster, but you weren´t ready in any way. All the stuff on the tables fell to the floor. Books fell out of the shelves. A cup of tea fell over a computer and if you stood up - suddenly you lied on the floor. It really was a mess. As Flora said: “It´s a big mess in the Big Mess”. Poor Starboard got a lot to clean up.

I am really looking forward to being able to stand still on solid ground again. And to get some sunny weather in Gran Canarias. Saturday is the estimated time of arrival. We´re going to drop anchor outside Las Palmas for about 24 hours before we can go to port. Can´t wait!