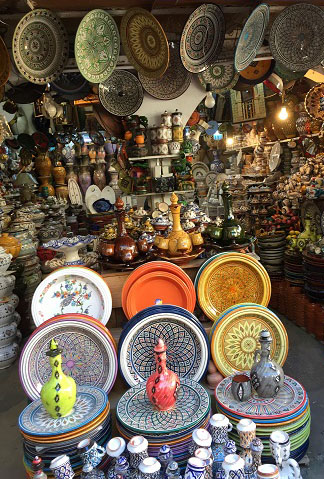 Today is also the first free day for port so we and starboard had the opportunity to go out to the city today.

So, it is our second day here in Safi and we only have a couple of days left before going home to Sweden. We´ve started working on the final cleaning of the boat and I must say that it is extremely boring but unfortunately quite necessary. Today is also the first free day for port so we and starboard had the opportunity to go out to the city today. To be able to do that we must be in a group of at least six and there must be at least one, preferably more, boys in it. We also have to cover ourselves a bit more than usual.

After breakfast we went to a café about ten minutes in to the city. It was located a bit outside the Medina which is a part of the town that is surrounded by a wall. We ordered breakfast treys where we got coffee, newly made orange juice, olives, homemade bread, dates, olive oil, chocolate, a sort of oatmeal- milk- porridge thing that didn´t taste much, croissants and something that was a combo of pancakes and creeps. It was amazing and very fun to try a more Moroccan breakfast (I have by the way noticed that we tend to write a lot about food in our blogs). The café also had Wi-Fi which was a plus and not at all one of the reasons we went there.

Than when you went through the walls of the Medina it was like going in to a new city. It was a long road whit shops and stores that sold clothes, shoes, food, candy and most of all ceramics. It was like an own quarter for all the ceramic stores and everything except the sky and the ground was covered in plates, cups, bowls and a strangely large amount of egg holders. It was very beautiful whit all the different coulure’s and pattern’s.

It was a bit strange walking around because you knew you should act in a specific way but wasn´t really aware of what that way was, should I go whit my head down or should I act normal or am I over thinking it and a lot of more or´s?

It was, all and all extremely strange. Firstly, it seemed like everyone knew where we came from and what we did here, some also took pictures and videos. It was hard to know how act and people often offered tea. Is seems like drinking very sweetened mint tea whit strangers is some sort of tradition. So, you got some strange looks, mostly depending on where you went (some streets were better than others) but mostly people acted very nicely towards you.

I hope you´ll get a good Christmas, even though it´s almost a month left and that you get to eat a lot of gingerbread.