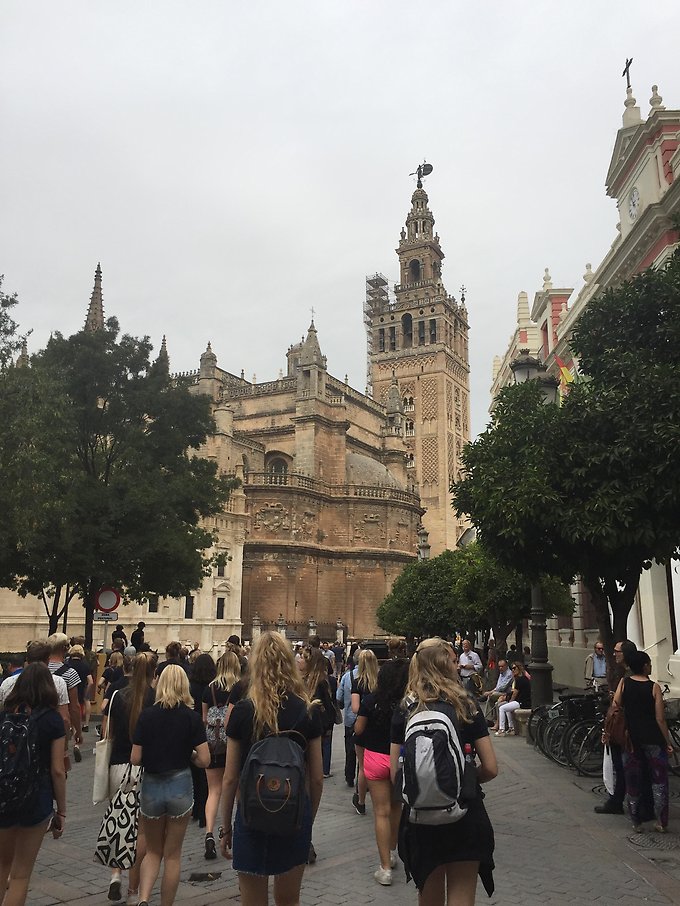 A day in Sevilla

A day filled with work in the galley, bus rides, guided tours, detailed artwork, beautiful paintings, amazing sculptures, rain and thunder. All of this experienced in a city called Sevilla, about an hour away from Cádiz.

The day began at 6 am when me and two others from port had to wake up to make the breakfast ready for the rest of the crew. We went to the galley, the kitchen on Gunilla, washed our hands and then started to prepare the breakfast which was served at 07.15. After finishing breakfast we went back to the galley and started washing the dishes.

After breakfast the entire crew gathered on the main deck to ring a bell eight times, which symbolizes that the clock is 8 am, and also to hoist both the Swedish and the Spanish flag. When this ceremony was done we started walking towards the bus stop where a bus later picked us up and drove us to Sevilla.

When we arrived at Sevilla we met up with a guide who brought us to a castle called Alcázar. He talked about the history of the castle while he showed us around. Inside the castle there were several rooms with different paintings in each one. There were also plenty of different tile patterns on the walls and they were all very beautiful and unique. Outside the castle there was a garden filled with green bushes, colorful flowers, a few fountains and there was also a peacock.

When the tour of Alcázar was finished we ate our lunch bags which me and the others in the galley had made the day before. After lunch the second half of the tour, which was in the cathedral next to the castle, began. The cathedral had large rooms with plenty of sculptures and different types of architecture. Just like the castle, the cathedral was extremely beautiful.

Before we got on the bus and drove back to Gunilla we had about two and a half hours to spend in Sevilla. In that time me and some other girls went to a café and ordered some ice cream which tasted delicious. When we were on our way back to the location where we were supposed to gather, it started raining and thundering. It was the first time that the weather have been that bad since we got here but we managed to successfully get on the bus without getting too wet.

Overall I think the day went well because I got a lot of new experiences that I will have use for later in life, and also because I got to experience and see all the beautiful things in the castle and the cathedral.