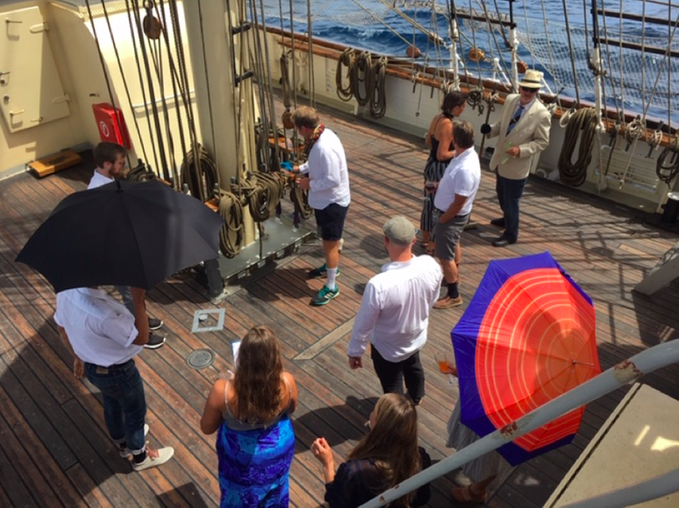 It was a cold and cloudy morning, but the weather was about to change, and the day became booth warm and sunny. The wind is currently taking us straight towards our destination in Horta, the Azores, and we are keeping the solid speed of 6 nots. The swell of the waves we have endured during the last couple of days has started to decrease as the wind has started to lose in strength. This enables us to finally walk straight again. The direction of the wind also enables us to get it in from the stern, so the boat won’t lean that much anymore. Today we past the Mid Atlantic Ridge so that we now find ourselves to be back in the same continental plateau as Europe. We are still some hundred nautical miles from land though, in the middle of nowhere.

Today was our 10th day at sea. The days so far has had quite the same structure. Work, study, eat, sleep. It feels like ages since we left Bermuda. But today wasn`t going to be just another casual day at sea. Today is the 17th of May you se. For most people, just another spring day, but for our Norden neighbours to the west, there is much more to it. Today is the national day of Norway. To celebrate this special occasion, we took the chance to pay tribute to our beautiful neighbouring country with a tournament in deck golf, Gunilla Atlantic masters 2019.

To those of you who aren’t familiar with the concept, shame. This is among the most prestigious and glorious sports there is. It dates back all the way to the late 19th century. All since, it has been in development and modified into perfection. Deck golf qualifies as one of the most noble sports among others like polo or cricket. Manners is most important for all participants and every rule should be followed to the best of your power. To participate it is demanded that you behave with dignity. Casual cloths won’t do it. Every participant must be representable dressed to the best of his or her ability. Along with your posture through out the game, this is the most important qualities to become a good athlete. It is also of greatest importance that you come newly shaved, or with a certificate from our paramedic aboard for permission not to.

So how does this traditional sport work? To start of it is an individual sport. Despite this you do have help from your Caddie, carrying your equipment and giving you tactical advice, just like in golf. Three different tracks are designed on main deck. All containing a starting line, a drop zone for balls getting stuck, to witch, a removal cost one hit, and the hole existing of a square of tape. The ball should be struck with a gentle hit while the participant is presenting himself in good figure. Your equipment contains of three clubs. The driver consists of a magnificent deck-brush, the iron club is a gutter brush and the small but so important “puttern” is made up by a traditional dish brush. The ball is crafted of a snuffbox. Every ball is weighed with extreme precision to accomplish just the right weight. The winner from each watch and from command qualifies to the final which takes place tomorrow.

Today we in the 8-12 watch (port), were woken up by Nora, who has a Norwegian citizenship, so it was a suiting start of the day. During the morning the time had been move forward so we had one hour less sleep. There are only a 2-hour difference to Sweden now though. As usual we came up on deck ready for watch, wearing our usual working clothes. This was soon about to change though. First, we received the responsibility of cleaning of the deck where today’s action is going to take place. We also marked up the tracks. Then it was time. The work force was dismissed in order to change their clothes and to get ready. When we came up again, everyone was dressed very proper. Everyone had really put in some effort in their outfits and it was nice seeing everyone so dressed up. While standing there a grate ship passed by quite close for once. I wonder what they must have thought seeing us then, dressed up from bottom to the top, swinging brushes with great dignity. An even battle was fought out there and with impressing precision and an imposing figure Linnéa finally took a strong victory with her astonishing 16 hits. Much more than that didn`t happen during this morning watch.

Despite the big day you can’t escape the lessons that took place after watch just as usual. Although we received permission to get up on deck to watch the command play. An astonishing and most entertaining sight to say the very least. All students still dressed up, where gathered in a fancy stand on the poop deck, while the command where playing on the main deck. They were dressed in impressive creations. With grate focus they were hitting the snuffbox with the brushes while playing classic music in the background and a carrying a drink in one hand. Not what you are used to see a usual day at sea. Amazing to see everyone so dressed up and good looking. When it was over, Torben, the captain, won an impressing victory among the commands. Coincidence?

The tournament was now over for today but the fun wasn`t over yet. Towards the evening there were a combined open-air walking and quiz compilation around on deck about Norwegian words and things. Norway’s guest flag was also hoisted. Afterwards it was time for watch again. Although it was obvious that no one was ready to get back to the usual routines just yet. This resulted in that we sat in the radio room, eating popcorn and watching the movie “around cape horn” and later sang songs during our watch.

This has been an amazing day out here in the middle of the Atlantic Ocean. The great question now is how we can top this to the Swedish national day that will take place during our last voyage on our way back to Sweden, Öckerö.

Best regards from the middle of nowhere.