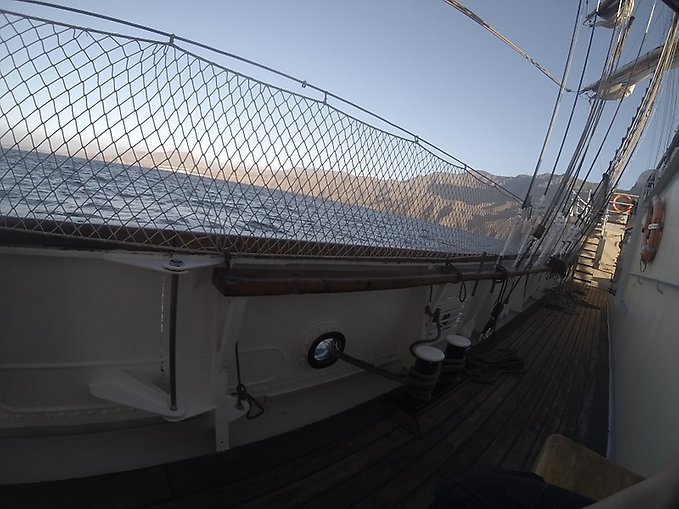 A day of work in Grenada

Today was our second day here in Grenada and our fist watch day. It was hot outside and we all got really tired in the sunlight.

The first work that I had to do on our watch was to paint some parts of rust red. Me and my friend Linnea talked about a lot of things when we painted. After we was done with that, i did some lacquer work on the staysail boom. It was okay to do it then because the sun hadn’t rised that high so I wasn’t burned to death.

After two hours of work we got a brake and it was really nice because we got some mango, apple and grape fruit to eat in the coolness of the shadows.

After the brake we went out and started to do some work again but after just one or two hours in the sunlight I got really tired and I could feel that my brain ached. But as a miracle, our watch leader appeared in front of me and told both me and my friend to go inside to start with the cleaning. I have never been so happy to hear the stupid words of cleaning before, but this time I felt different. It was so nice when we walked through the heavy door away from the burning sun outside.

In the afternoon, some students from a secondary school for boys in Grenada came over to visit ours ship. It was fun to meet the them all and we felt happy that we got the chance to show them around before they leaved the boat but before they did that, we offered each one of them a typical Swedish dish, the cinnamon bun.

For dinner, we had invited both Mr. Frank and Mandoo but Jakob had also some of his old friends over. It was really fun and interesting to listen to all of their stories and we were happy that we got the opportunity to ask them about some school projects, that we had here in Grenada. For a long time, we talked about their religion but eventually we went out of questions. Which was really sad because we all enjoyed listening to them. But weirdly, one guy did actually fall asleep. Thankfully Mr. Frank didn’t take that personally. Instead he just laughed, woke him up and told us another story.

So, after a long day filled with hard work and laughter it was eventually time to go to our beds.