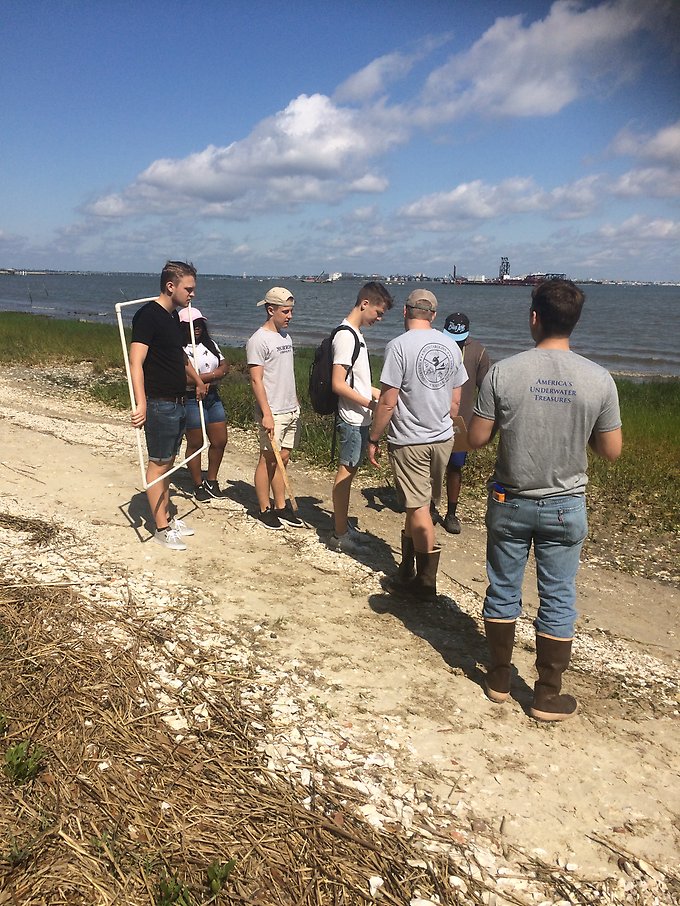 A Day with Americans

Bright and early all the students from nature program had to be ready to embark on a half a day expedition, to meet and socialize with students from a school nearby. Meanwhile the rest of the crew did their normal taking care of the boat for the day until the students studying deck and maritime went to a museum in an old aircraft carrier. After the expedition with the group did I and two other set course towards a bright and fun afternoon I Charleston downtown.

Right after the morning meeting all the ones studying nature had to be ready to leave the ship and go to where the buss was waiting. The bus that was waiting on us got everyone exited, because everyone had talked about how funny it would be to ride in a classic American yellow school bus. The excitement went away quit quickly, because the seats in front were so close the ones with long legs had to sit on the side to fit in.

Well at the Grice Marine Lab the local students where waiting and had just arrived minutes before us and had not jet settled down on the grass. All the students were divided in to three groups with equal amount of Swedish and American students. The groups had different assignments or stations which all had the goal to show how those who work with the sea might have it and inspire us fore further studies. The best thing about the trip was to meet and talk to the American students to learn and see how their life differs from ours. The students were all really friendly and kind to us, I had a nice time chatting around with a few of them and I would have loved to spend more time with them.

Instead of joining us the deck and maritime students went to a museum inside and of and old aircraft carrier. The carriers where just on the other side of the river so they took the smaller rib boat that T/S Gunilla always carries around. I haven’t heard much about their visit to the museum, but it seams like it was nice.

After the trips was over and everyone were back on the boat everyone formed smaller groups to go in to town with. But before everyone disappeared in to town the nature science students had to do a test with water collected at the lab.

Lastly, I just want to say that the dinner today was amazing, and I think everyone ate until they felt sick.