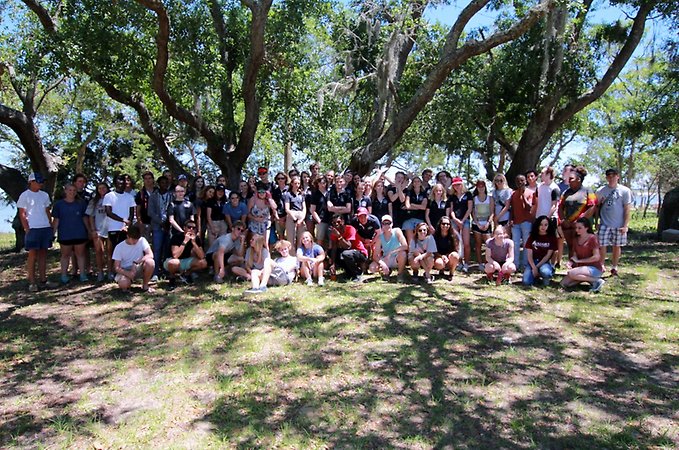 At the end, it felt like we got to know them more, and some of us took the chance to do some interview for schoolwork. We took the school bus back to the ship were starboard had to stay to work and the rest of us had spare time.

At 8:30 we were ready to meet the students from Charleston. The sun burned on our skin when we stood at popdeck, waiting for them. They wanted to visit our ship and we showed them around. They asked some questions, if we get seasick, what we do on a regular day and so on. It was quite awkward in the beginning but it became very interesting after some time when we got more comfortable speaking to and getting to know them. That’s a good thing about Gunilla and our school, you get to know people from other cultures with different lives than what you’re used to. We also gave them some Swedish culture by serving a typical Swedish “fika”, today in form of cinnamon buns. It looked like they enjoyed it.

When we were done showing them around, we took this typical yellow American school bus together with the American students to Grice, a marine biology center. At Grice, we were divided into three groups, starboard, midship and portside with American students in each group. The first thing my group, midship, got to do was looking at conserved fish. It was really cool, but at the same time kind of gross, since some of the fishes were over ten years old. When you walked down the rows of jars, it kind of felt weird, having dead fishes staring at you.

Although they didn’t just have dead animals at Grice. They also had some turtles, blowfishes, crabs and other fun animals we got to look at. After we were done with our first stop on our day, we got out to eat some lunch and talk some more with the students.

On our second stop we got to know about recycling oysters. In pair of three or four we used a shovel to put oystershells in bags, that were supposed to be put into the sea to conserve the reefs. After a while we didn’t even feel the smell of oyster. With sweat all over or bodies and shells in our shoes we went over to the last station where we saw a lot of marine animals and looked at virtue disks, that the third grades from our school had put into the water last year.

At the end, it felt like we got to know them more, and some of us took the chance to do some interview for schoolwork. We took the school bus back to the ship were starboard had to stay to work and the rest of us had spare time. Therefore, me and some friends took a walk in the beautiful city looking around. When we came back to the boat, we were really tired after the long day. Fortunately, we got some awesome chefs here at Gunilla, so we ate a good meal of another typical Swedish food, pyttipanna. Satisfied from the good food and fun day we sat down to study. Something we need to make time for, even though we would rather watch a movie or play games. Well, well, thinking about you back home, it’s okay to have this kind of homeworks.