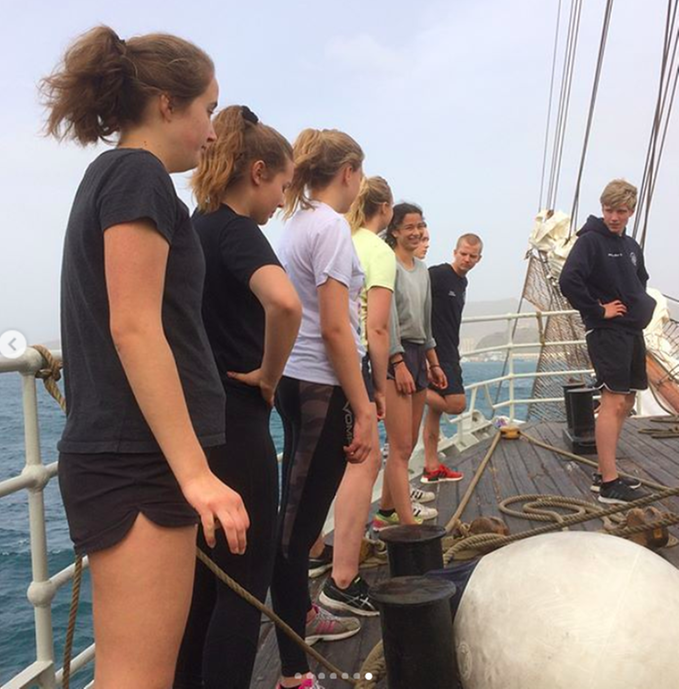 A hard day in Cape Verde

Today was one of those days you really hope that people who think that life onboard t/s gunilla is all sunny weather and relaxing had been there.

We arrived in Mindelo on Christmas eve in the morning, two days before we were expecting because we had sailed here with good winds and speed which we of course had to work very hard to achieve. We were very happy that we at least could celebrate Christmas with not having the boat rocking from side to side and everything flying all over the place.

We were not allowed to go in to the harbour since we were not expected for another two days so we dropped our anchor outside the harbour and celebrated an amazing Christmas and spent both Christmas eve and Christmas day out anchoring. We spent the days swimming and enjoying the amazing heat and the beautiful blue water which was a lot warmer than it has ever been at home.

All this sounds very nice and believe me, it really was, but when it was time to pull the anchor up the machine that does so broke. We spent most of our time before lunch trying to mend it but despite all efforts we didn´t get it to work, so we had to go old fashioned.

We tied a rope to the anchor and led it thru some pullies. Then we lined up, about 8 people at the time, took the rope and started pulling. Slowly and steady we dragged the anchor up. Inch by inch the 600-kilo anchor and 3 tons worth of chain that we had let out was reeled in over a two-hour effort. The 8 people that were on the rope shifted as we got tired or as our hands tore to shreds. There was not a single person on that rope that was enjoying it, but we got it up as a team. When we finally were done we had pulled 135 meters of chain and when people started to look down on their hands there was no questioning about our effort.

We all went to bed that day happy because we finally were in a new harbour and happy to have the effort behind us.