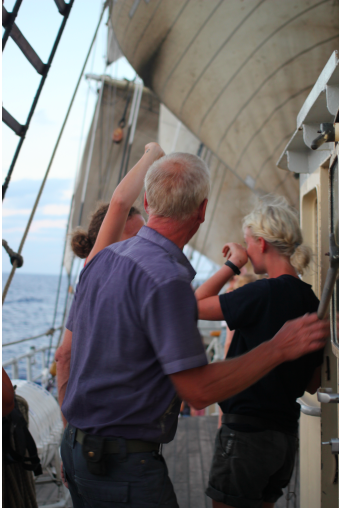 A lost hammer and the, later on, inspiring words of a bosun

On my first trip here on the ship I found a hammer lying under the forecastle, and new as I was on the locations of things (and everything concerning the boat actually) I told the bosun that I’d found it. He answered with an ironic smile and said ”It doesn’t matter where you found it, what’s important is where it should be, right?”.

The only thing I reflected on back then was his short tone, thinking someone woke up on the wrong side of the bunk this morning, but the past couple of days a certain thought has been on my mind and the words of the bosun came back to me.

There are few things as simple as life on a sailing ship. You get woken up by the person going rounds when it’s time for watch, food or something else important, you know exactly what to do during the four hours of watch (if you don’t your watch leader surely will tell you), you know the persons surrounding you and you know what’s about to come when the routine repeats itself as the days and nights go by. Only small things change, the work tasks, the weather (mostly don’t), the meals (gladly more often do), the wind. Most things stay more or less the same though, and as you know what you’re set out to do you don’t have to think further than the next coffee-time.

We have our own bunks in our cabins, our personal wardrobe and hook, but the rest of the ship we more or less share, student as superior, and I think that makes a big part of the strong feeling of belonging. Here even the tools and things not just ”shall be put” on a special place, but literally ”live” somewhere. Like every cabin’s door tells us who live where, lockers and drawer tells us where everything from screwdrivers to bottles of honey ”live”. And when you share your everyday life as we do, even with the objects, I feel it’s hard not to think about how we all ended up here.

Each and every one aboard has their story and first connection to the boat, and a reason to be here. Maybe some of us wanted to travel and was hooked by the idea of moving to the island, maybe some of us were seeking away from something back home and saw the possibility to get away a bit. Never the less all of us met in the seeking of something new and challenging, towards something special, a rare unity, and here we are.

After almost three years together in our class I think we know each other well enough to know each others’ backgrounds, where we come from and what our lives looked like before, but I feel it is something more than coincidence that we are here together today. We’ve sailed with some of the superiors before as well but I have never heard their full stories, only small parts that slips out here and there that gives you a better picture of them and who they are, more deep going. Some relations are completely new, like our watch leaders’, but all three are former students of the school as well, they’ve done these trips, and that makes them understand us in a way few can, as we understand a part of them.

Either way we all have at least one thing in common, we chose to be here. Despite different personalities and lives I think there is a part in every one of us here onboard that is the same. You don’t have to try to explain the feeling of having watch at night, or the moment when you first set sails after leaving shore, how the movement of the boat stabilises and everything turns calm. How you feel strangely powerful onboard a ship facing the ocean, using the wind to cross it, but at the same time never felt more powerless and small surrounded by water and more water. How you never feel lonely as you’re constantly surrounded by others, but learn to be by yourself even with each other when you need to. You don’t have to try to explain because everyone else already knows. Maybe the same thing goes when it comes to us as the hammer under the forecastle; maybe it’s not where you come from that matters, that defines you, but where you belong.